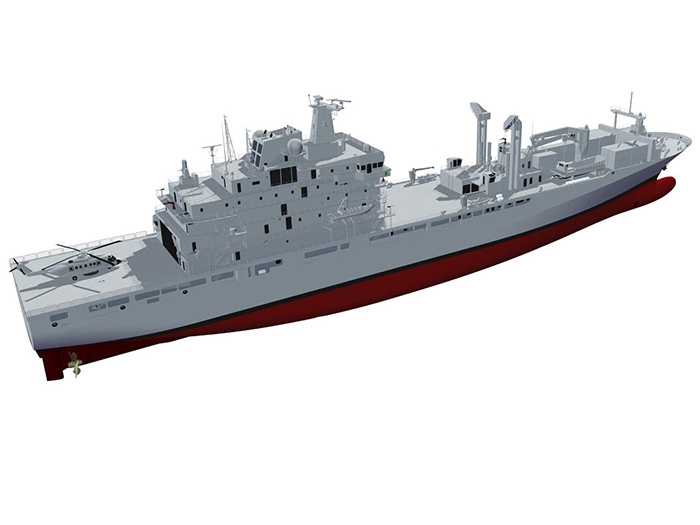 Artist's rendering of the definition design for the JSS

MARCH 1, 2017 — The Government of Canada says it has “taken the final step before building” the Joint Support Ships called for under the National Shipbuilding Strategy’s (NSS) non-combat vessels package, with an estimated project budget of $2.3 billion.

In December 2015, Vancouver Shipyards Co. Ltd. was awarded the long lead items contract to engage suppliers and select the equipment, including the propulsion systems and generators, needed to finalize the design and to build the JSS.

Now, as a next step to bring the design to production readiness, Vancouver Shipyards has been awarded the JSS Design & Production Engineering (D&PE) contract, valued at approximately $230 million.

According to a news release, “the signing of the JSS D&PE contract will incorporate state-of-the-art Canadian capabilities and ensure the continued development of the design, technical and procurement specifications associated with the JSS project. This includes the development and finalization of the ship build plan (including the test, trial, and build strategy), the required manufacturing content, and the finalization of the 3-D product model. At the conclusion of the JSS D&PE contract, the JSS design will be ready for production and construction.”

The JSS project will build two ships with an option for a third. The first ship is scheduled for delivery in 2021. The second ship is expected to be delivered in 2022.

The two JSSs will be the long-term replacement of the more than forty-year-old Auxiliary Oiler Replenishment vessels, Protecteur-class, which have been taken out of service. Both ships will provide core replenishment, limited sea-lift capabilities and support for operations ashore.

The JSS will allow naval task groups to remain at sea anywhere in the world for long periods of time without going to shore for replenishment. It will provide fuel, ammunition, spare parts, food, and water to Canadian and allied vessels. These modern ships will also support deployed forces with medical and dental care facilities, as well as helicopter repair capabilities.

Meantime, to bridge the gap until the JSS is actually delivered, outside of the National Shipbuilding Strategy, Chantiers Davie Canada is converting a modern containership into an interim fleet supply vessel for the Royal Canadian Navy that will have pretty much the same sort of capabilities as the JSS. It is set for sea trials in September this year.