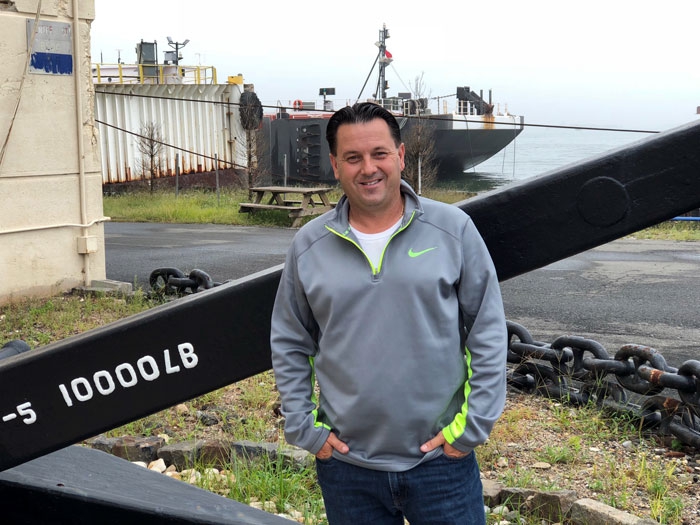 SEPTEMBER 18, 2018 — Perched on a manmade peninsula in New York Harbor, Bayonne Dry Dock & Repair Corporation, Bayonne, NJ, is in the midst of a major expansion that will see it invest approximately $18 million in its facility.

BDD utilizes it massive graving dock—measuring 1,092 ft x 148 ft, with a floor load capacity of 99,000 tons—to do just that. The concrete graving dock can accommodate the largest Military Sealift Command (MSC), government, and commercial cargo ships. The graving dock has a “95% occupancy of hard bookings” over the next 8 to 10 months, according to Cranston.

Cranston says the current expansion is aimed at serving the region’s growing small commercial vessel market, including ferries, tugs, dinner boats and service vessels. Among the key investments are the floating drydock from Union Drydock and a large mobile boat hoist. The expansion will see the shipyard add up to 80 new skilled workers.

“With the new tax cuts and depreciation laws that Congress passed last year, there is a lot more opportunity for investment for new equipment,” says Cranston. He also points out that it’s also good for his workforce. “The employees are also coming home with more money now.”

In addition, this past summer BDD was awarded $1,081,950 Small Shipyard Grant by the U.S. Maritime Administration in support of the purchase of a CNC plasma table, brake press, plate roll, welding machines, iron worker, graving dock upgrades and hydroblast equipment.

Overseeing much of BDD’s expansion is Bob Magas, General Manager Commercial Operations, who joined the shipyard this past February. A graduate of the U.S. Merchant Marine Academy at Kings Point, NY, Magas has a Bachelor of Science degree in Marine Engineering and extensive experience in the tug and barge market, serving as a Vessel Superintendent, Chief Engineer and Assistant Engineer at K-Sea Transportation and Eklof Marine, and General Manager, Engineering Division at Kirby Offshore.

Magas says one of the “key pieces of the puzzle” that is being added to the shipyard is a mobile boat hoist (MBH), currently under construction at Cimolai Technology SpA in Italy. “The 1,280-ton MBH will be the largest of its type in the region,” says Magas, enabling the shipyard to lift and haul out the largest boats operating in New York Harbor, including ATB tugs.

BDD will use the MBH to simultaneously service vessels in a repair staging area, increasing the shipyard’s capacity and flexibility to support the commercial market.