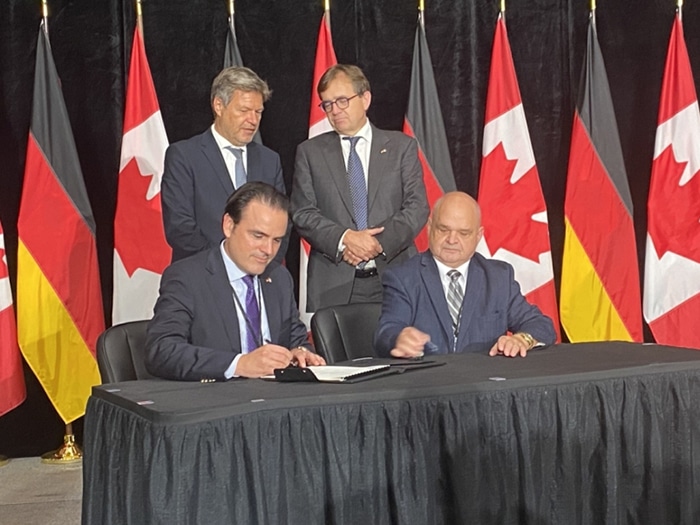 Oceanex Inc. provides intermodal transportation services to the province of Newfoundland and Labrador and the new ConRo design will be critical to its future vessel replacement planning for its current three-ship fleet.

The MoU was signed during a high level German trade mission to Canada in which FSG managing director Philipp Maracke participated at the invitation of German Chancellor Olaf Scholz. It was co-signed by Maracke and Oceanex executive chairman Captain Sid Hynes in the presence of the German Federal Minister Minister for Economic Affairs and Climate Action Dr. Robert Habeck and Canada’s Minister of Natural Resources Jonathan Wilkinson.

Together, the partners intend to investigate the utilization of alternative fuels, such as ammonia, methanol, synthetic and biofuels as well as hydrogen, and the technologies based on them in relation to Oceanex’s Atlantic Canada operational area. The central approach of FSG is a comprehensive life-cycle analysis that links long-term economic and ecological perspectives already in the planning stage.

“As a shipyard, we have ambitious goals to become a major pillar of the energy transition. FSG has already positioned itself as an innovation leader for low-emission ship designs in the past,” says Maracke. “Building on our references and expertise, we want to be a driver when it comes to energy transition in shipping.”

“Our customers rely on Oceanex to provide competitive, reliable, and sustainable transportation services,” says Hynes. “Doing so with environmental leadership is top of mind, so building our fleet of vessels to ensure we’re leveraging the latest technologies and the most environmentally friendly fuel sources is critical for Oceanex. Partnering with FSG will allow us to do just that.”