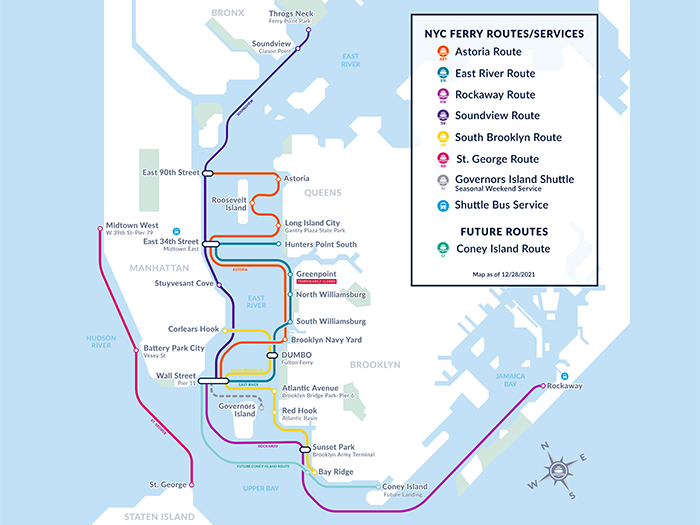 Kushner, who oversees NYC Ferry, spoke on the city’s historic investment in ferries that NYC Ferry became a six-route (soon to be seven) ferry service connecting all five boroughs, with 38 purpose-built vessels that provide safe and reliable daily service

NYCEDC is a mission-driven, nonprofit organization that creates shared prosperity across New York City by strengthening neighborhoods and creating good jobs. The organization works with and for communities to bring emerging industries to New York City; develop spaces and facilities for businesses; empower New Yorkers through training and skill-building; and invest in sustainable projects that make the city a great place to live and work.

In this Q&A, Kushner talks about NYC Ferry, economic development, and human impact as NYCEDC works to make the city’s neighborhoods and economy stronger and more inclusive.

Marine Log (ML): How does NYCEDC support waterfront access and maritime use as the Maritime Contract holder for the City of New York?

Cecilia Kushner (CK): NYCEDC holds the Maritime Contract for the City of New York. This means we promote the economic development of the city’s waterfront properties, and that includes supporting resilience, waterfront access, and maritime use.

DockNYC is a great example of this. Created in 2013 as a public-private partnership, an Operator manages a portfolio of public berthing sites on behalf of NYCEDC.  Currently, the program contains more than 10,000 linear feet of dock space and serves more than 30 vessel operators. Collectively, these permittees create over 500 jobs in the harbor, which is remarkable.

ML: What can you tell us about New York City’s historic investment in ferries?

CK: NYCEDC is an organization that thinks strategically and long-term. This is why we are well suited to bring big, complicated ideas from concept to action. In many ways, we are a startup engine for the city.

In 2011, NYCEDC launched the East River Ferry, a single route connecting Brooklyn, Queens, and Manhattan, as a pilot program. After the route more than doubled ridership projections in the first year, NYCEDC’s transportation department conducted a study in 2013 to evaluate potential additional routes.

What we saw in that study was that a citywide ferry system could create shorter commutes for people along the waterfront—many who otherwise would need to travel far inland to reach a subway or bus.

Public ferries would be an important transportation alternative. With a historic investment, Mayor de Blasio directed EDC to make that idea a reality. The directive was ambitious, but we did it!

We procured an operator, completed a wide environmental review, built 15 new ferry landings and a state-of-the-art homeport. In partnership with our operator, we procured and built a fleet of purpose-built vessels. There was a community outreach plan and hundreds of employees were hired and trained. We did all of this in just over two years!

ML: NYC Ferry is still expanding. Can you tell us more about that?

CK: In 2019, de Blasio announced the further expansion of NYC Ferry after a feasibility study that assessed over 30 different sites. The Covid-19 pandemic delayed originally launched expansion targets, but we’re proud that the St. George route, connecting Staten Island’s North Shore to Manhattan’s West Side, launched this summer. Plus, just as the year ended, we opened our newest landing, a second Bronx location in Throgs Neck as an extension of the Soundview route. NYC Ferry is now a true citywide transit system.

ML: We know from experience that ferries are resilient. How has COVID-19 impacted ridership and what did NYC Ferry do to overcome pandemic-related challenges?

New York is nothing if not resilient—and our ferry system is the same! In the last few months, the world has seen a lot of changes to help move us forward. NYC Ferry workers were some of the first to be vaccinated as the State opened up eligibility to transportation employees.

We are pleased to share NYC Ferry has seen a higher percentage ridership return than other forms of public transportation. It feels good to be in the open air on a boat rather than underground. Many residents also enjoy the ferries for weekend adventures, exploring our great city and all it has to offer.

Today, ridership is holding steady between 70-80% of pre-pandemic numbers. While the COVID-19 pandemic delays kept us from launching as early as originally planned, I am proud that we did launch the St. George route from Staten Island to the West Side of Manhattan this past August. As we close out this year, we will continue to monitor ridership trends and new commuting patterns.

ML: In addition to the seventh ferry route in the city, what’s next for NYC Ferry?

CK: NYCEDC continues to evaluate ways we can make the NYC Ferry system more efficient and cost effective. Looking ahead to the future, we will be changing the South Brooklyn route to include year-round service to Governors Island. Plus, our plans to build a second homeport facility and warehouse continue; and we expect to break ground next year—and open the facility in 2023.

All of this as we transition to a new city administration and join our city colleagues in continuing to work toward a recovery for all of us.