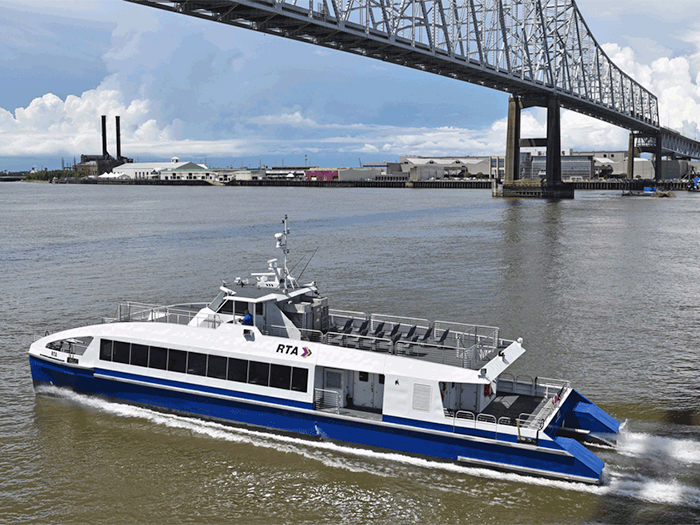 The New Orleans Regional Transit Authority (RTA) reports that one of its two new ferry vessels, RTA2, entered revenue service on Saturday, October 10. RTA2 will serve as the primary revenue vessel for the ferry service between the Algiers Point and Canal Street terminals.

To mark the entry into service of the 105-foot, 150-passenger, BMT-designed, aluminum high-speed catamaran, RTA dubbed October 10 “Ferry Rider Appreciation Day” and invited community members to the Algiers Ferry Terminal to ride the new vessel and celebrate the day with Golden Tickets and RTA giveaways.

According to nola.com, “all day, RTA2 got rave reviews from passengers.” (You can read the rest of the report HERE).

“It is the RTA Board of Commissioners’ highest priority to provide safe, reliable, and equitable transportation to the people of New Orleans across all transit modes,” said Flozell Daniels Jr., Chair, RTA Board of Commissioners. “The launch of the new vessel marks another important milestone on the path to advancing the mission of the RTA as we stand positioned to deliver ferry transportation our riders deserve. We will continue to work closely and diligently with our ferry operating partners to ensure that world‐class ferry service is not only an expectation but an imperative.”

The other new ferry, RTA1, is currently undergoing final modifications and upgrades with the vessel manufacturer. Upon returning to New Orleans and securing its Certificate of Inspection, RTA1 will also enter revenue service and will be alternated with RTA2 as the primary service vessels. The Col. Frank X. Armiger will remain on standby status.