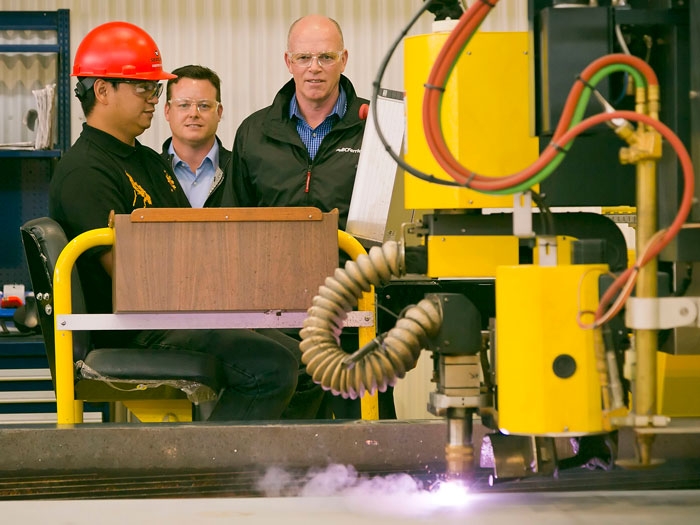 The 78.5 m ferry, slated for delivery from the shipbuilder in Spring 2015, will accommodate up to 50 vehicles and 150 passengers, while servicing the Buckley Bay to Denman Island route.

The new build will engage all Vancouver Shipyards unions, including Marine and Shipbuilders Local 506, International Association of Machinists Lodge 692, International Brotherhood of Electrical Workers Local 213, United Association of Pipefitters Local 170, and Canadian Office and Professional Employees Local 15, and is expected to employ 100 workers at the peak of the project.

“Seaspan has a long and established relationship working with BC Ferries in building and repairing ships for the people of British Columbia, and we are proud to begin construction today of its first-ever cable ferry at our new, state-of-the-art, $185 million facility,” said Brian Carter, President – Seaspan Shipyards.

The Cable Ferry project follows several other BC Ferries contracts that have been successfully completed at Seaspan Shipyards in 2013/14, including maintenance refits on the Northern Adventure, Island Sky, Coastal Celebration and Spirit of Vancouver Island.

“With community roots tracing back to 1886, Seaspan is a long-serving contributor to British Columbia’s economy and we look forward to continuing to play that role for many years to come through our service to BC Ferries and its customers,” said Mr. Carter.

“We’re proud of our partnership with Seaspan and we know that they will construct an excellent ship for the millions of customers who will sail on her over the next 40 years,” said Mike Corrigan, BC Ferries’ President and CEO.