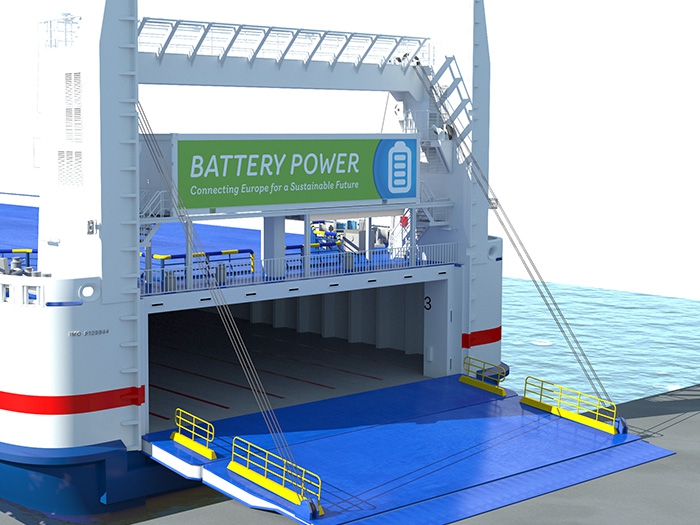 Before the summer, says Stena Line, battery power in port operation will become a reality. However, its future target for battery operation is to be able to navigate the vessel for 50 nautical miles.

“Sustainability is very high on our agenda and we are constantly evaluating new ways to reduce our impact on the environment,” says Stena Line CEO Niclas Mårtensson. “From 2015, for example, methanol is part of the fuel mix on Stena Germanica, which operates between Gothenburg and Kiel, and we also run around 300 different energy saving projects. As both the size and cost of batteries decrease, battery operation becomes a very exciting alternative to traditional fuels for shipping, as emissions to air can be completely eliminated”

The three-phase battery project will be completed step by step. The first phase will see battery power used for bow thrusters and maneuvering when berthing in port.

The second phase, which is expected to be completed in 2022, will extend battery operation to the propellers, so that Stena Jutlandica can operate on electricity within around 10 nautical miles, equal to the distance between Göteborg and Vinga Lighthouse.

The third phase, which is expected to be completed in 2030, will expand the battery capacity to enable operation on electricity for about 50 nautical miles — the distance between Gothenburg and Frederikshavn.

The objective of accomplishing this in several steps, says Stena Line, is to test and gather knowledge about electrical operation along the way. If the project is successful, battery operation may also be applicable to other vessels in the Stena Line fleet of 38 vessels.

The technical solutions are being developed together with Stena Teknik, which cooperates with the academic world, authorities and various suppliers.

According to Stena Line spokesman Jesper Waltersson, the total project investment is SEK25 million (or about $3 million at current exchange rates), with 50% of the funding being provided by the EU and Swedish Transport Administration.

The technology tested is based on plug-in hybrid technology. The batteries are charged when the ship is connected to shore power, which is also an important focus area on clean energy, but can also be charged while operating the ship’s generators.

Every year Stena Lines moves about 7 million freight units, 2 million passengers and 1.5 million cars. Stena Line employs approximately 5,500 staff and crew and 2015 had a turnover of about SEK14 billion.

PROJECT PHASES AT A GLANCE

Battery power on bow thrusters and maneuvering when berthing in port.