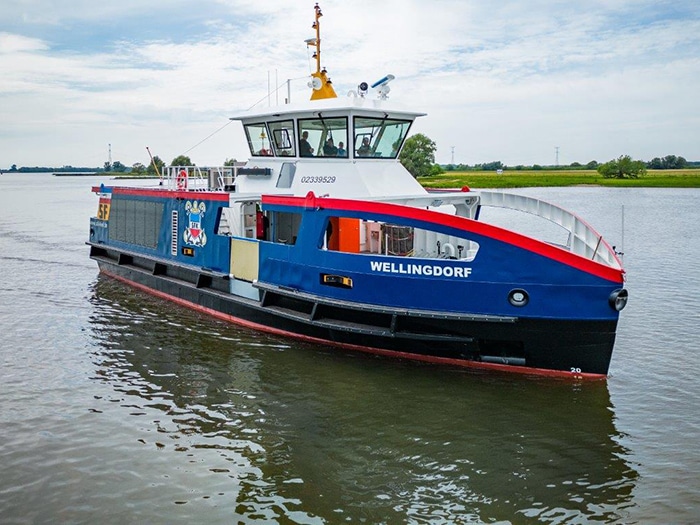 Kiel, Germany, based ferry (and tugboat) operator SFK has christened its second fully-electric ferry, the Wellingdorf. The 24.70 meters long by 7.20 meters wide ferry can carry 140 pedestrians and 60 cycles. It is a sister vessel to the previously delivered Düsternbrook and is the fifth in a series of four hybrid and two fully-electric vessels designed and built for SKF by Holland Shipyards Group. The final (hybrid) vessel in the series, Schilksee, is expected to be delivered early 2026. The vessel is completely emissions-free and entirely powered by battery power with an installed capacity of 1,092 kWh. In addition to the Green Orca battery pack, supplied by Dutch marine battery system supplier EST-Floattech, the vessel has 20 solar panels on the roof to serve the onboard power supply network.

“While almost all ferries referred to as ‘fully-electric’ still have backup power provided by a diesel engine, the Wellingdorf has no such backup and gets redundancies from the split battery system,” says Holland Shipyards Group. “This means that the ferry propulsion really is all-electric.”

Another feature of the ferry is a non-conventional automated mooring system which features electric-hydraulically operated mooring hooks in both sides of the ship. The mooring system is easily controlled from the wheelhouse by the captain. While moored, no power has to be directed to the propulsion system, resulting in a reduction in energy consumption.

SFK is renewing its fleet in line with the environmental goals set by the city of Kiel, which aims to be CO2 neutral by 2050 and expects shipping to play a major part in this shift.

“It is particularly pleasing there will be two e-ferries commuting on the F2 Schwentinelinie in the future,” said SKF managing director Andreas Schulz. “This means that this ferry line from Kiel’s west shore to the east shore will basically be served all-electrically by the SFK vessels.”

“Public transport on the water will benefit from the new construction, as up to 140 passengers can get on board without barriers and we can also carry 60 bicycles that can be individually parked and removed,” noted Schulz. “Passengers can get on board quickly and conveniently via two 1.60 meter wide access ramps operated by the captain. There is only one deck, which is provided in the front area for the bicycles and in the rear area for the passengers, who can buy their tickets on board at a machine without cash.”

According to Shulz, with the storage capacity of the battery packs of 1,092 kilowatts per hour and photovoltaics (20 solar cells), the ship should be able to operate for around thirteen hours before it needs to be recharged, with appropriate charging infrastructure set up at the ferry piers and at SKF’s workshop pontoon. Further technical equipment includes two electric propulsion motors, each rated at 86 kW, and a 40 kW independent bow thruster.

The construction costs for the Wellingdorf were just under $3.2 million euros. 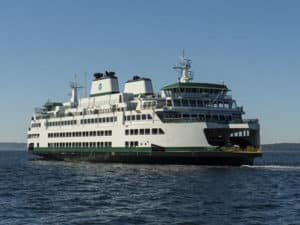