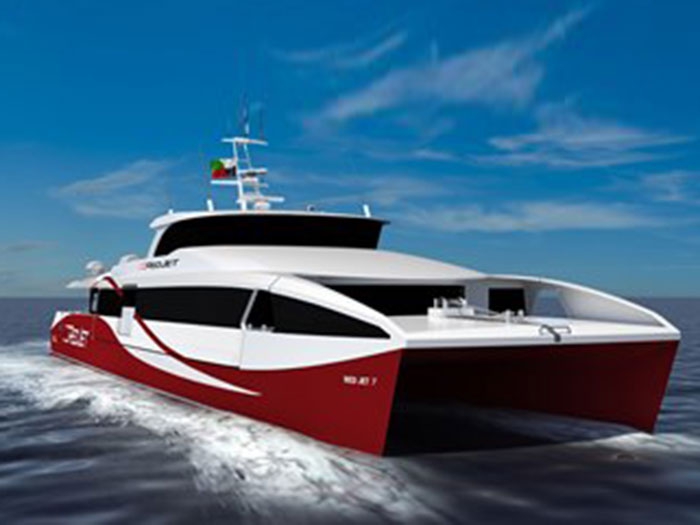 SEPTEMBER 7, 2017 — U.K. ferry operator Red Funnel has placed an order with Wight Shipyard Ltd in East Cowes, Isle of Wight, for a 41 m high-speed catamaran that will inject £7 million (about $9.1 million) into the Isle of Wight economy and secure 85 skilled jobs.

The order is the first major investment in Red Funnel by the consortium of U.K. and Canadian pension funds that acquired the cross-Solent ferry operator in July 2017 and underscores the new owner’s commitment to Red Funnel’s Southampton-West Cowes route.

To be named Red Jet 7, the vessel will be a sister ship to the highly successful Red Jet 6 which was designed by Australia’s One2three naval architects and built by Wight Shipyard in 2016. That order from Red Funnel restarted the construction of fast-ferries in the U.K. and on the Isle of Wight after a gap of 16 years. Delivered on time and on budget, Red Jet 6 helped Wight Shipyard secure more vessel refit contracts and two new fast ferry orders from London based MBNA Thames Clippers, the last of which was delivered this summer.

“Red Jet 7 will be virtually identical to Red Jet 6 which has proved to be efficient, comfortable and popular with our customers,” said Kevin George, Red Funnel CEO. “Once Red Jet 7 joins the fleet next summer we will have three large modern Red Jets each capable of carrying 277 passengers in comfort in all weather conditions. The introduction of Red Jet 7 will represent a further 51% increase in capacity for the Red Jet service”.

Peter Morton, Managing Director of Wight Shipyard said, “We are delighted to receive this order for Red Jet 7 which follows on from Red Jet 6 which we built last year. There can be no better endorsement than a customer placing a repeat order and I would particularly like to thank Red Funnel for their belief in our product and the quality of our work on the Isle of Wight.

Red Jet 7 will offer ground breaking levels of reliability, safety and passenger comfort with the accommodation insulated from the hulls to reduce vibration and cabin noise. A high bandwidth ship-to-shore Wi-Fi system will be installed which will be free for customers and the latest travel information system will be installed to show connecting services for buses, coaches, trains and flights in real-time. Other features include USB charging-points, LED lighting and a toilet.

Other technical innovations to reduce fuel consumption include the use of vynil instead of paint for the superstructure to reduce weight and the application of Teflon hull coatings to minimize drag through the water.