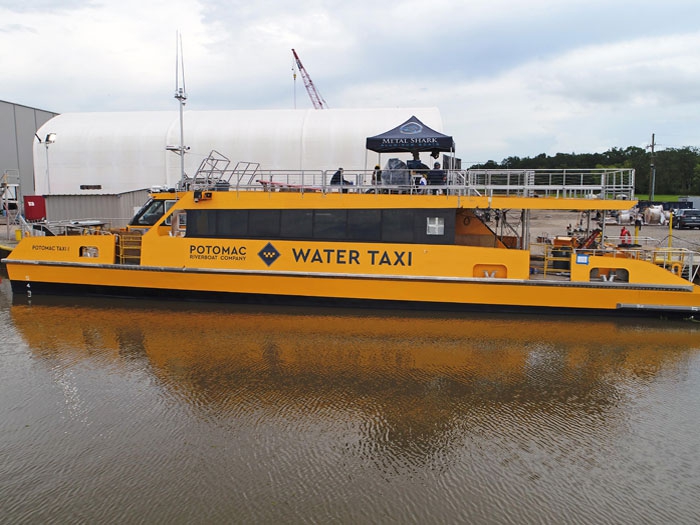 AUGUST 16, 2017—Ferry and water taxi services are playing an integral role in economic development, as metropolitan areas are “rediscovering” and redeveloping their waterfronts for businesses and residences.

A good example of this are four new water taxis that are being built by shipbuilder Metal Shark for Potomac Riverboat Company, a division of Entertainment Cruises—one of the largest operators of dinner and sightseeing boats in the U.S. At its Franklin, LA, shipyard, Metal Shark recently launched the first two of four high-speed, low-wash, 149-passenger water taxis that will provide commuter passenger service in the Washington, DC, metro area.

Designed by BMT Designers & Planners, Alexandria, VA, the water taxis will provide commuters in the Washington, DC, metro region with service between Old Town Alexandria, VA; National Harbor, MD; and Georgetown and The Wharf—a new mile-long development along the Potomac River in Washington, DC, that will feature restaurants, shops, night life, and residences.

Each of the four 88 ft water taxis is powered by a pair of Scania DI13-liter diesel engines. Plans are for the first two boats to be delivered in mid-September.