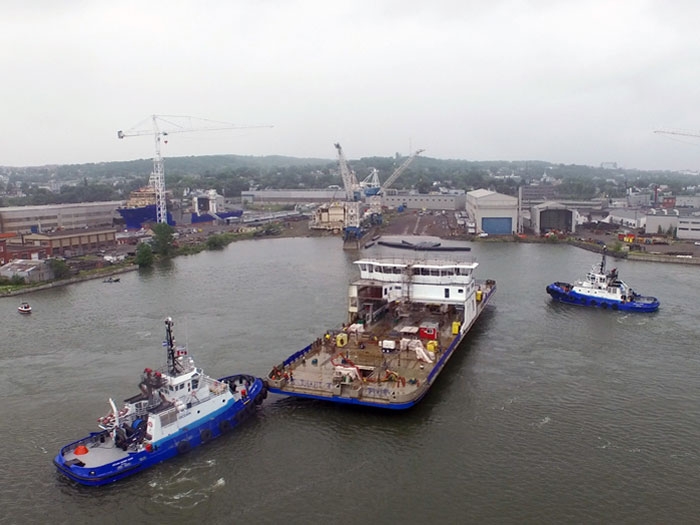 JULY 19, 2015—The first of dual fuel ferry ever built for North America was launched yesterday at Chantier Davie Canada Inc. in Levis, Quebec. The MV Armand-Imbeau II is the first of two dual fuel ferries being built by the Canadian shipyard for ferry operator Société des Traversiers du Québec (STQ).

Chantier Davies had a keel laying ceremony for the vessel back in February.

Classed by Lloyd’s Register, the MV Armand-Imbeau II is scheduled to be delivered by Chantier Davie this fall, followed by her sister ship, the MV Jos-Deschênes II, four months later. Both ferries are Ice-Class rated to 1A for the hull and 1AS for the propulsion system, for year-round ice navigation. Each can carry up to 432 passengers, 115 cars and eight heavy goods vehicles.

The ferries will have Wärtsilä 20DF engines and LNGPac fuel storage and treatment systems and electric thrusters rather than conventional propellers.

Chantier Davie used a pneumatic lift bag system for the ferry launching, the first time such a system has been used in Canada), according to the shipyard. The lift bag system is environmentally friendly as it is fully reusable and eliminates the need to dispose of wooden foundations after launching. Additionally, the lift bag system also means less stresses are placed on the ship’s hull during launching and that the launching is carried out in a controlled manner.