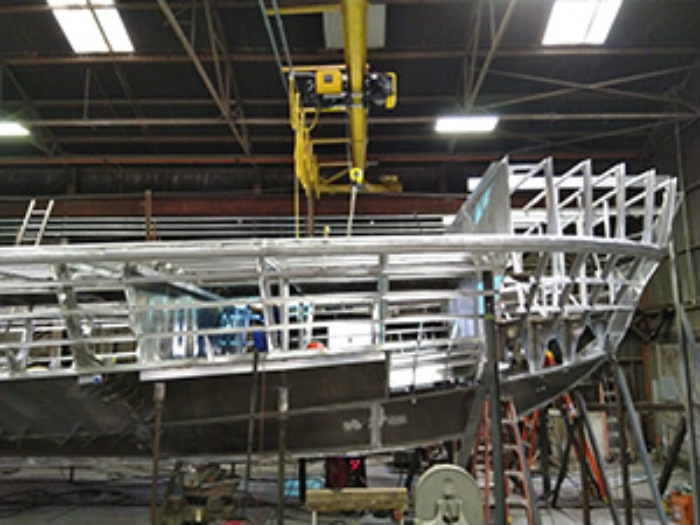 OCTOBER 5, 2018 — Tucked away in the small New England town of Warren, RI, privately held Blount Boats has a long tradition of building passenger boats over its almost 70-year history. It counts among its hulls the 1952-built Miss Liberty, which has ferried some 60 million passengers from The Battery in Manhattan to the Statue of Liberty in New York Harbor.

There’s still a close connection between Blount Boats and New York Harbor as reflected in its current order book. It is currently building three ferries for New York operators. As we reported last summer, Blount Boats together with Elliott Bay Design Group (EBDG), Seattle, WA, was awarded a contract to design and construct a new passenger-only ferry for Governors Island by The Trust For Governors Island (Trust). The Blount/EBDG partnership combines their extensive knowledge, skills and experience in the design and construction of ferries.

Blount Boats reports that painting is 50% complete on the 132 ft x 40 ft steel hull, Hull #369. “Blount Boats is honored to have been chosen by the Trust to build another iconic vessel for New York Harbor,” Marcia Blount, President of Blount Boats, said upon award of the contract. Robert J. Pelletier, Vice President of Blount Boats, is the Project Manager for the construction at the shipyard. When delivered, the ferry will shuttle passengers from lower Manhattan to Governors Island.

Plating for the aluminum-hulled ferry for Fire Island, Hull #370, is 90% complete. Blount Boats announced the signing of the contract with Fire Island Ferries this past winter to construct an 85-foot aluminum ferryboat for service between Bay Shore and Fire Island on Great South Bay. This vessel is a sister ship to the M/V Fire Islander (Hull 368) built by Blount Boats in 2013.

The triple-screw vessel will be built and certified under U.S. Coast Guard, Subchapter K Rules and Regulations. It will be powered by John Deere Model #6135SFM85 diesel engines, 650 hp each at 2,100 rev/min, with 2:1 ZF 550 reduction gears. This vessel marks the 10th boat designed and built by the Blount shipyard for Fire Island Ferries since 1972, a milestone for the two companies.

The Clark family, owners of South Ferry Company, have been providing transportation between Shelter Island, NY, and North Haven, NY, on Long Island’s southern tip since the 1700’s. The Southern Cross will be a sistership to two other Blount built ferries designed by DeJong & Lebet for South Ferry; the Sunrise, Hull #311, delivered in 2002 and the Southside, Hull #323, delivered in 2009.