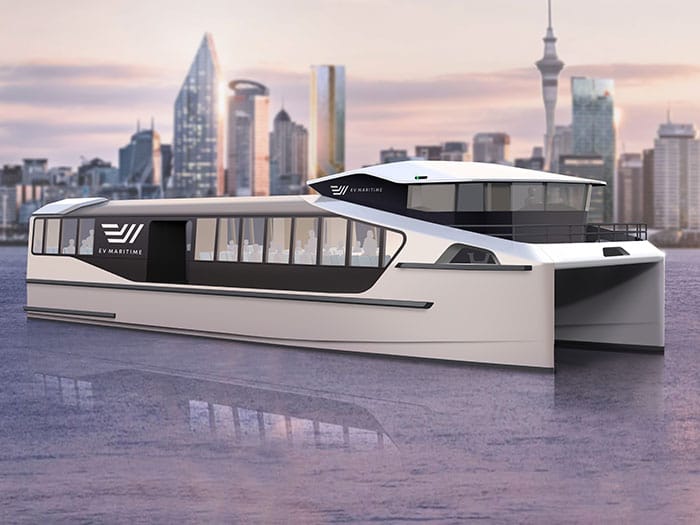 Auckland's first two all electric ferries are set for delivery in 2024.

Auckland, New Zealand, is aiming to operate an entirely electric fleet of passenger ferries by 2040, which is expected to save one million tons of CO2 annually.

Initially, Auckland Transport will operate its first two electric fast ferries across all major inner and mid-harbor services, providing a pathway for further ferry electrification in the future.

The ferries are set for delivery in 2024. They will be owned and operated by Auckland Transport and are being built with the support of NZD 27 million (about US$18 million) in grant funding from the Government of New Zealand. This is expected to cover approximately 75% of their construction cost.

The 24-meter vessels will be capable of carrying up to 200 passengers and traveling at speeds up to 25 knots. Each ferry will save at least a thousand tons of CO2 annually and will be built using composite materials.

Designed and engineered in New Zealand by EV Maritime, the ferries will be powered by a Danfoss Editron electronic and power management marine system comprising converters, propulsion motors, DC-link, transformers and an energy management system. The vessels will be each be propelled by four HamiltonJet propulsors driven by the motors.

Danfoss’ Editron division will also provide an independent battery connection for each battery string, delivering high efficiency and fully electric power to the motors regardless of the battery stage and voltage. In the event of a fault, the Editron DC system’s single-fault tolerance will guarantee that all four thrusters can continue running on at least half power, or three thrusters can run on full power.

The project will be the first to be delivered as part of a memorandum of understanding (MOU) between Danfoss and EV Maritime that will see the two companies partner to offer fully electric ferry solutions to cities world wide.

“Achieving a zero-emissions marine industry is a team effort, so we’re excited by the new opportunities this MOU will offer,” said Philipp Fedorov, marine sales director of Danfoss’ Editron division. Our future commercial rollout, beginning in Auckland, will bring together the latest electric propulsion technologies and shore charging infrastructure.”

“Our solution is one of the most efficient, compact, and reliable on the market, while our approach also means that batteries can be easily upgraded,” said Federov. “furthermore, it allows different battery makers to integrate into one system or add alternative energy sources such as fuel cells. This concept, co-developed with EV Maritime, will be easy to scale, replicate, and implement in any location and environment.”

“We chose to partner with Danfoss’ Editron division for its weight and size-efficient power electronics, which are a significant enabler of the high-speed capabilities that set these vessels apart,” said Michael Eaglen, co-founder and CEO of EV Maritime. “This project aims to create an innovative and pioneering zero-emissions urban transportation alternative. We believe it’s only the beginning of Auckland’s marine electrification journey and are looking forward to working on future projects with Danfoss worldwide.”