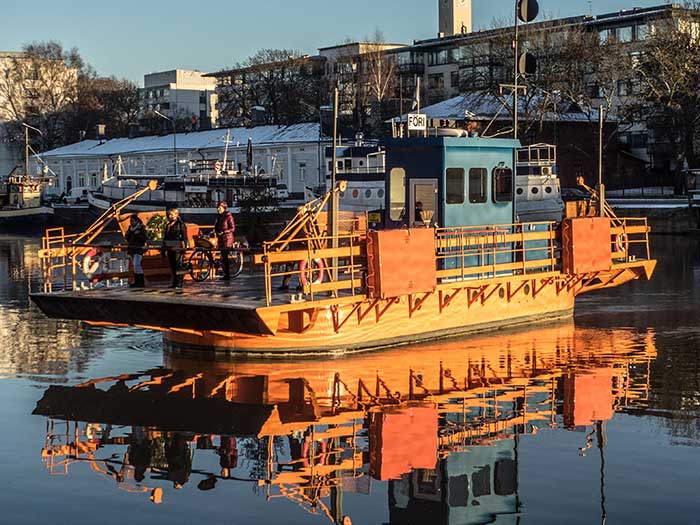 APRIL 28, 2017 — Finland’s oldest operating ferry will be relaunched tomorrow as its first all-electric passenger vessel after being fitted with a Visedo zero-emission electric drivetrain.

The historic ferry Föri initially entered service in 1904, after the City of Turku commissioned local shipyard Aktiebolaget Vulcan to build a city commuter ferry to take passengers across the Aura River to Åbo. The ferry was originally fitted with wood-burning steam engines. In 1955 the steam engines were replaced by diesel engines.

The ferry shuttles back and forth across the Aura River on a route that takes about a minute and a half to complete, running year round except in heavy ice, when it is replaced by an ice bridge.

In 2015 the City of Turku decided to convert the vessel to electric drive and commissioned local boatyard Mobimar to complete the upgrade, whern the vessel was drydocked in March this year. As well

The new vessel draws power from batteries that are charged overnight, with the new power system simultaneously improving redundancy and making it possible to run on one or two motors – particularly important during icy conditions. This also allows future motor maintenance to be done in shifts, with no interruption to vessel operation.

The DC/DC converters serve to increase the battery voltage to a level that is more suitable for the motor drives. This minimizes losses while maximising performance and reliability.

“The Föri ferry is a national treasure but with its old diesel engine, fuel consumption and emissions were high and overall efficiency poor,” says Visedo Project Engineer Heikki Sallinen. “Visedo power brings the 100-year-old vessel into the 21st century without changing its character and delivers zero-emission transport for Turku.

“The revolution to electrify the world’s diesel transport is already underway. After powering Asia’s first hybrid electric ferry in Taiwan and continuing to work on the project to power the world’s biggest E-ferry in Denmark, at home, Visedo is proud to help transform Finland’s oldest ferry into its first all-electric vessel.”

“For such a sensitive project as this we needed a project partner who could deliver a new permanent magnet motor and charging technology built for purpose,” says Mobimar Project Manager Antti Immonen. “There was no off-the-shelf solution, we needed a partner who could be flexible and responsive to our needs – in that regard Visedo is like us in our approach to pioneering innovation for demanding applications.”

As well as workboat building and repair, Mobimar also provides submarines for the tourist industry and has built almost half of the world’s operational tourist submarine.

“We were already impressed by Visedo during a previous collaboration with Mobimar to modernize a Korean Mark V65 submarine,” says Mr. Immonen. “There are now 240,000 passengers who have dived to depth below the Yellow Sea in a submarine with a Visedo-powered system. And we used some of the same components in the Föri!”