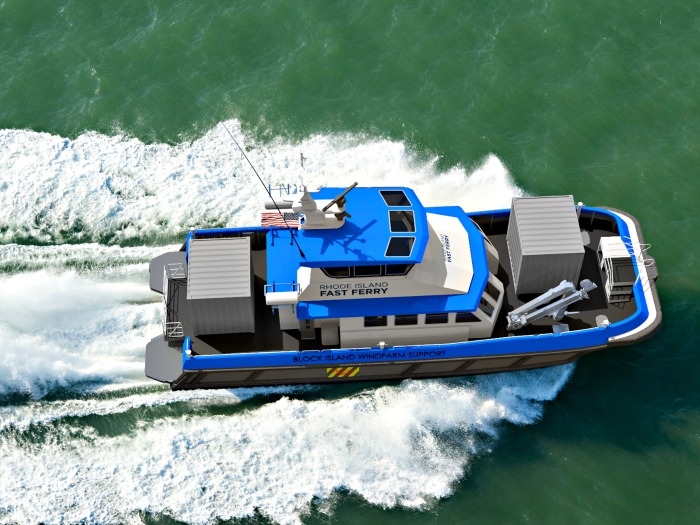 MAY 20, 2015—Blount Boats, Warren, RI, recently signed a contract with Rhode Island Fast Ferry to build what is believed to be the first U.S.-flag wind farm vessel.

The 21 meter crew transfer vessel (CTV) is based on a design by South Boats IOW (Isle of Wight) and will operate for Deepwater Wind Block Island in Rhode Island. The five turbine wind farm, the first commercial wind farm in the U.S., is expected to be up and running by the fourth quarter of 2016.

Alstom will supply five Haliade 150 6 MW offshore wind turbines for the Deepwater Wind Block Island Wind Farm and has already completed the fabrication in Denmark of all 15 blades for the project.

South Boats IOW is a leader in the design and manufacture crew transfer vessels. They have designed and built some 85 CTV’s for the European offshore wind sector and by threefold has the largest market share, largest product range and greatest experience with their vessels working on all of the European and U.K. wind farm projects.

The South Boats-designed stock 21m wind farm vessel is an all aluminum catamaran.  It will be dual certified to USCG Subchapter T (Small Passenger) to carry up to 49 passengers and subchapter L (Offshore Supply Vessel) to carry up to 16 offshore workers.

The CTV’s two 1,400-hp MAN V12 main engines will drive two HamiltonJet HM571 waterjets via ZF Marine 3050 marine gears.  The vessel is predicted to reach sprint speeds in excess of 28 knots, with the ability to cruise (80% power) at 27 knots when in a light condition and 23 knots in loaded condition.

A Cummins Onan 17kw generator will provide AC power to the air conditioning system, a heating system and small galley. A PTO driven hydraulic system will power a deck crane, the fire pump, a fuel transfer pump, and a salt water pressure washing system. All other equipment will be fed DC power through house batteries.

The bow has a bow boarding/loading platform to allow offshore workers to make the transition from the vessel to the wind turbine.  The vessel connects to the turbine base by use of a special bow fendering system.  The specified fender is the latest generation in proven fendering systems being installed in the European fleet.  The vessel will be capable of making transfers in 1.5m significant wave heights.

The interior of the deckhouse will be outfit with a head, a small galley area with settee seating, 12 suspension seats, storage lockers, entertainment system, Wi-Fi, and sound absorbing decking. The entire deck house is isolated from the hull with vibration mounts for a quieter and smoother ride to and from the work site.

Delivery is scheduled for April 1, 2016, with the CTV entering service by May of that year.