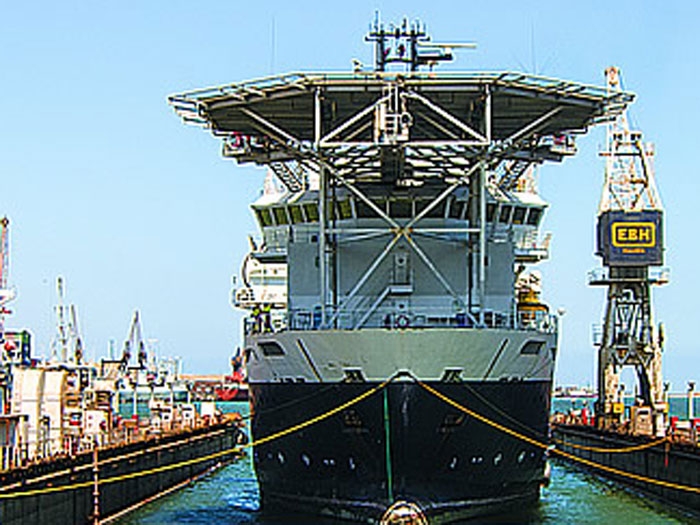 The company operates three privately-owned floating dry docks including a Panamax-sized dry dock. Back in March 2015, with “a very evident reduction in vessel dry docking requests,” it adopted a series of stringent performance improvement plans (PIPs) to examine its efficiencies in all areas of the business, reduce costs and make efficiency improvements in systems such as procurement.

CEO Hannes Uys says that the approach has yielded significant savings but that the shipyard — whose core focus is the downstream offshore supply vessel repair market — has recently experienced a 50% decline in docking activity.

“We are now in a position where the sustained effect of the low oil price on production along the west coast of Africa, and in particular our core market, Angola, led to a 50% net loss in revenue, which in turn forced us to embark on a company-wide restructuring and stabilization program,” says Mr. Uys.

The situation has necessitated the retrenchment of some full-time shipyard employees.

“These are tough, but necessary measures which we are putting in place, in order to maintain and strengthen EBH Namibia’s competitiveness during a very challenging time in our industry,” says Mr. Uys.

“I would like to assure all our stakeholders that the management of EBH Namibia will follow due process and comply with all legislative requirements,” he says. “We are engaging closely with the Labor Ministry as well as worker representative bodies, which all play a key role in this process. We are indeed committed to a process which will encourage ongoing communication and a deeper understanding of the situation for all those involved.”

Mr. Uys believes that oil prices will probably start stabilizing and improving in 2017.

“We certainly do not need the oil price to be at the ‘dizzy heights’ it was before the price dropped in 2014 for our core market to be re-energised and for the positive effect to start filtering through again,” he says.

Ensuring that the company is well positioned to rebound effectively and speedily when the market recovers is at the heart of EBH Namibia’s stabilization programme.

Mr. Uys says that “despite the challenges, we will be deploying various strategies – even with a restricted budget for the next 12 months – to ensure critical skills retention and development” and that EBH Namibia remains committed to its market, and will continue to work to attract vessels to Walvis Bay’s drydocking facilities, even when they are off-line or being stacked until called into service again.

The company remains strongly committed to servicing its core market. It sees the statutory class certification repair requirements of the majority of the 520 offshore supply vessels currently operating off the west coast of Africa as producing a significant spike in activity mid-way through 2017.

It says it is also working on various diversification strategies, and focusing on opportunities which are not oil-related.