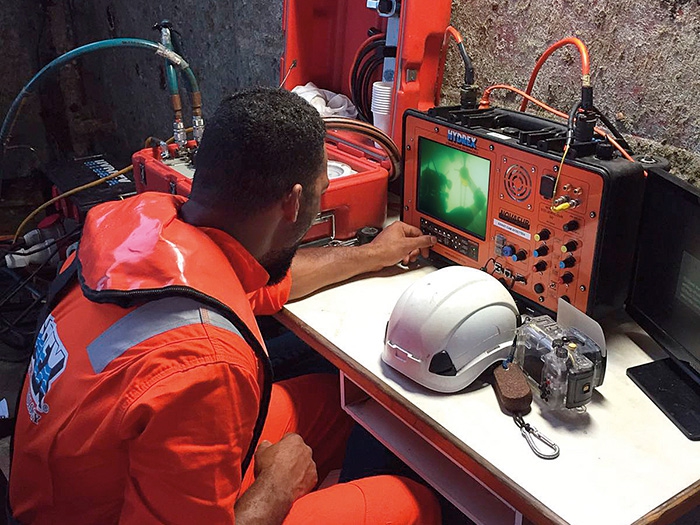 The unit left the field and was berthed alongside in August when a Hydrex team was called in to evaluate the damage and effect repair.

The operator of the unit first contacted Antwerp, Belgium, headquartered Hydrex at the beginning of the year to have the repair carried out before the summer. However, after changes in the platform’s schedule, Hydrex was asked to defer the repair until August, to coincide with other scheduled repair and maintenance work.

When the unit arrived in Veracruz, the Hydrex team set to work removing the rope guard of the portside sterntube seal assembly to carry out an underwater inspection. An underwater mobile dock, (mobdock), was then installed to provide repair technicians with a dry environment in which to work. They then removed the four damaged aft seals one by one and replaced them with new ones. Two forward seals were also replaced during the repair.

After reassembly and the completion of leak tests had verified oil-tight integrity, the team began to evaluate the damage to six starboard seals. The same approach to repair was taken

Dave Bleyenberg, Hydrex Production Executive, said: “Damaged stern tube seals will often cause an increasing amount of oil leaking or water ingress as the damage worsens. By replacing the seals when the damage is first discovered down time is kept to a minimum. Oil leakages can also produce a potential or actual liability when for instance going to the United States or other ecologically sensitive areas. When they have a leaking sterntube, ships are often not allowed to enter ports, or they can receive heavy fines.”

Hydrex repaired all 12 seals in a short time frame, resulting in minimum downtime and avoiding the need to drydock the unit.