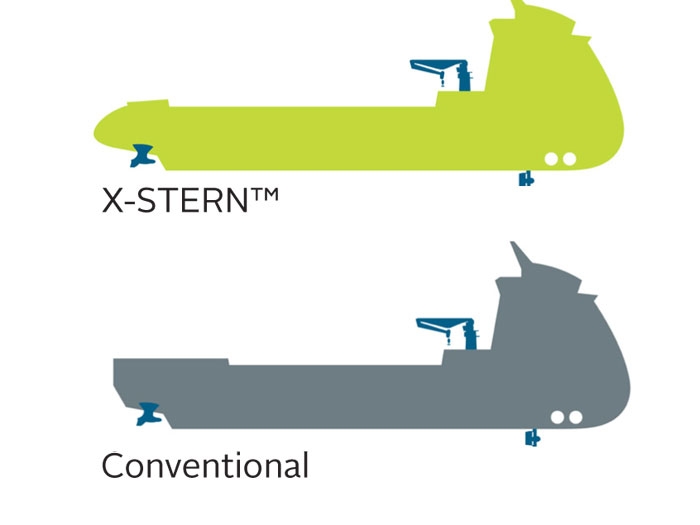 AUGUST 26, 2014 — The Ulstein Group is introducing the X-Stern, a design feature that brings the X-Bow effect to the aft ship, along with additional ice operation capabilities, increasing operability through positive effects on station keeping, wave response, comfort and safety in harsh conditions.

Ulstein Group introduced the X-Bow to the market in 2005 as a design feature that increases crew comfort while giving the opportunity to keep up speed in foul weather or the option of reduced fuel consumption. Currently, close to 100 X-Bow vessels are being constructed or have been delivered from shipyards world-wide.

Ulstein says that the X-Stern takes a new step in increasing vessel operability even more.

Several marine operations would benefit from the opportunity to position the ship stern towards the waves, wind and current. Having this choice increases the operational window.

The X-Stern is a sloping and higher stern, allowing for a sharp stern shape in which the transom plate is replaced by a pointed aft.

The X-Stern is a gentle displacer, resulting in lower pitch and reduced wave drift forces, and has ice operation capabilities.

For vessels where the best possible motion characteristics are vital, the Captain’s first choice will be to place the X-Stern towards the weather instead of the bow.

When placing the stern towards the weather, the X-Stern has a major effect on the vessel’s capabilities and flexibility. The aft working sector increases. Stern first, the vessel will be less influenced by weather, and wave drift is reduced.

The work deck aft is enclosed, with no sea on deck or ice build-up and increased safety for crew, cargo and equipment.

“An innovation process is a long process, in which we work strategically in order to come up with safer, smarter and greener solutions,” says Tore Ulstein, deputy CEO and Head of Markets & Innovations in Ulstein. “We discuss operational challenges with our customers, and work on how to transfer these challenges into technical solutions which can be turned into commercial products. The X-Stern is patent-pending in several countries, including the U.S.A .and in the EU.”