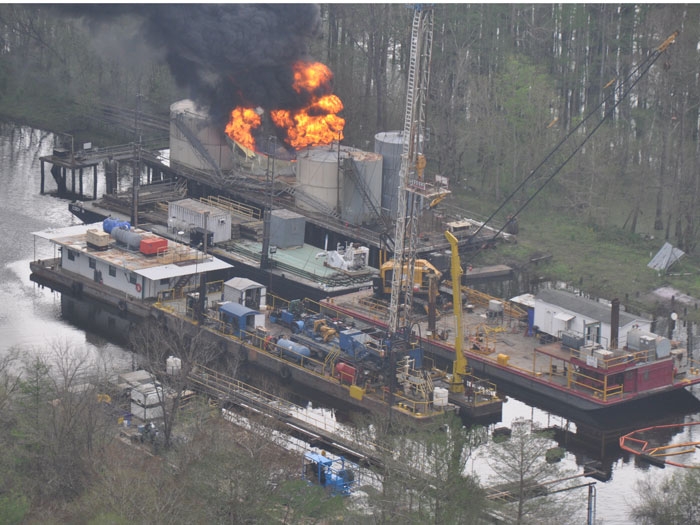 MARCH 16, 2015 — The Coast Guard reports that responders have extinguished a fire that broke out Tuesday on an oil production platform in Berry Lake Canal in Bayou Sorrel, Iberville Parish, LA.

Coast Guard Marine Safety Unit Baton Rouge was notified at 9:15 a.m., Tuesday, that the platform caught fire while in the process of being dismantled. One storage tank was on fire at that time, but the Coast Guard reported about 5:30 p.m. Tuesday that another storage tank had also caught fire.

There were two people on the platform when the fire broke out, but no injuries were reported.

The platform holds a maximum potential of 420,000 gallons of crude oil, but held only around 33,000 gallons at the time of the fire.

Response crews have deployed approximately 300 yards of containment boom across the canal entrance nearest the platform.

The Coast Guard said today that responders would remain on scene to monitor the situation and that thus far a minimum amount of pollution had been released which was expected to dissipate naturally.