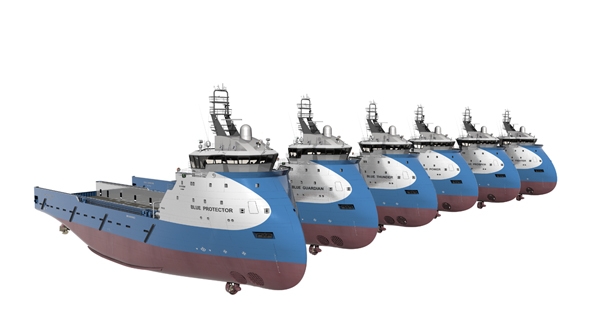 The vessels are the six Blue Ship PX121 PSVs that the Ulstein Group built for itself at its Ulstein Verft shipyard.

NAT is the sponsor of NAO and owns 26% of its share capital. A NAT subsidiary is the manager of NAO.

NAT says that five of the six NAO vessels are now on contract employment and notes that unlike the NAT crude tanker business in which the spot market plays a larger role, contract employment is more the norm in the PSV charter market. The PSV vessels are on contracts to major energy companies with an average duration (including options) of a little over two years with rates between $25,000 and $29,000 per day per vessel. Like NAT, NAO is expected to have a cash break even rate of around $12,000 per day per vessel.

NAT participated in the private placement of NAO shares in November 2013 with an investment of $65 million, which was financed by a follow-on equity offering in NAT at the same time. NAT has previously announced that it expects NAO to list its shares on the New York Stock Exchange as early as possible, hopefully during the first quarter of 2014. NAT is considering distributing to NAT shareholders about $10 million worth of NAO shares as a dividend in kind around the time of listing. This dividend equates to about $0.13 per NAT share. In addition, NAT is planning to declare a cash component to the NAT dividend expected to be paid in late February, 2014. Further information will be available when NAT releases its 4Q2013 results on February 10, 2014.

NAO offered the shares at $15 per share or about Norwegian Kroner (NOK) 91.50. The shares are currently trading in the Oslo OTC (Over the Counter) market at NOK 98.00 ($16.06 equivalent) at the time of this release. NAT expects NAO to pay dividends to its shareholders, including NAT. Dividends received by NAT are expected, in turn, to be distributed to NAT’s shareholders.

Nordic American Tankers says that it “continues to enjoy a strong tanker market” and will continue to operate as in the past.