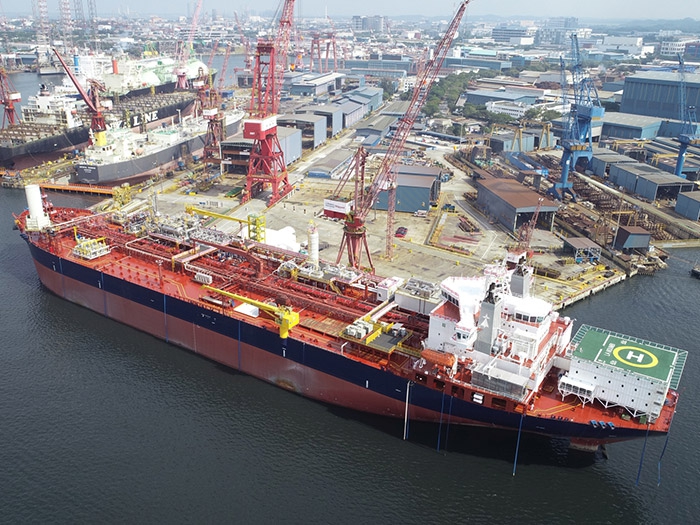 Keppel Shipyard's work scope on the conversion of the crude oil tanker into an FPSO included the installation and integration of topside process skids, fabrication of a new accommodation module along with life extension works

JULY 26, 2018 — Singapore’s Keppel Shipyard is on track is on track to deliver a Floating Production Storage and offloading vessel (FPSO) to Dixstone Holdings, an affiliate of the Perenco Group on time and with a strong safety record, reports Keppel Offshore & Marine.

Scheduled for delivery in the third quarter of this year, it will be deployed to the Yombo field operated by Perenco off the Republic of the Congo, Africa.

Keppel Shipyard’s work scope on the conversion of the crude oil tanker into an FPSO included the installation and integration of topside process skids, fabrication of a new accommodation module as well as life extension works.

The FPSO was named La Noumbi at Keppel Shipyard in a ceremony today attended by Mr. Jean-Marc Thysthere Tchicaya, Minister of Hydrocarbons, Republic of the Congo.

“We are pleased to be on track to deliver a sixth project to Perenco to their satisfaction,” said Mr. Chris Ong, CEO of Keppel Offshore & Marine. “Having delivered over 40% of the world’s converted FPSOs to-date, we are able to leverage our rich experience as well as strong partnership with Perenco to deliver a high quality FPSO in a cost-efficient and safe manner.

“This is also our fifth project for the Republic of the Congo and we are proud to have been able to support the development of the nation’s significant oil reserves over the years. In fact, the FPSO Conkouati which La Noumbi will be replacing was first converted by Keppel Shipyard in 1991 and has served the Yombo field for more than 25 years.”

Mr. Benoit de la Fouchardiere, CEO of Perenco, said, “The FPSO La Noumbi represents our commitment to enhance production in the Yombo field in the Republic of the Congo. We have partnered Keppel Shipyard because they are the industry leader in such conversions and have continually provided us excellent value and quality that meet our strict requirements. I am confident that La Noumbi will be just as successful as the FPSO Conkouati and serve for another 20 years.”