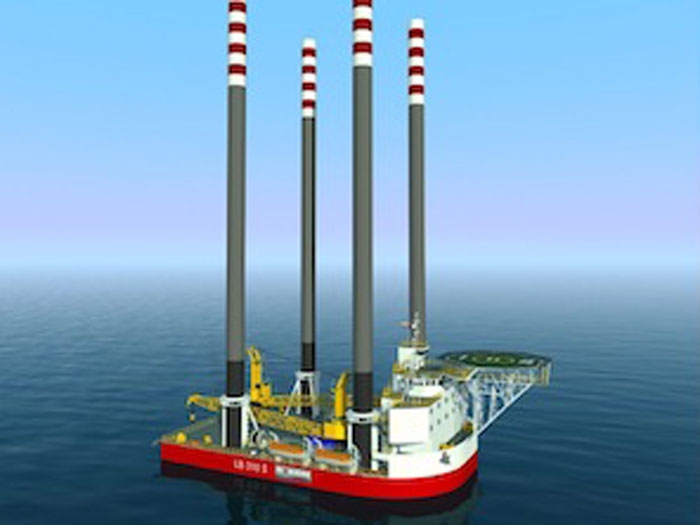 The liftboat has been designed by Keppel O&M’s liftboat design specialist, Bennett Offshore, in collaboration with Keppel FELS. Scheduled for delivery in fourth quarter 2017, the liftboat will have provisions enabling it to operate in China, the Middle East and the Gulf of Mexico.

Keppel’s self-elevating and self-propelled liftboat design is capable of operating at a water depth of up to 60 m. It will be equipped with a 280-tonne deck crane enabling it to undertake the maintenance of most shallow water oil and gas fields and wind farms, as well as various workover drilling operations and well intervention applications.

In addition to a large open deck space for cargo storage, the vessel has an accommodations capacity of 200 persons that is located above the main deck for greater safety considerations and meets the latest IMO requirements.

The strength of this system was demonstrated on the Seafox 5 offshore wind turbine installer when it completed over a hundred jacking cycles in a year, equivalent to what a typical drilling rig does over a 20-year span. Since the start of 2015, more than 4,000 jacking systems have been ordered of which some 2,900 are currently in operation on more than 70 jackup rigs.

Mr. Wong Kok Seng, Managing Director of Keppel O&M (Offshore) and Keppel FELS, said, “This latest contract from Crystal Heights is the second liftboat based on Keppel’s innovative proprietary solution that Keppel has been contracted to build within a year.

“We have leveraged our jack-up rig technologies and expertise to develop our own series of liftboat designs that is able to value add to the industry. For instance, it will have a higher freeboard for safer operations and retractable spud cans flushed to the bottom of the rig’s hull which reduces drag when transiting between locations.

“Even as the market for drilling rigs remains depressed, Keppel has the versatility and capabilities to design and build other products that are in demand, such as mobile units for plug and abandonment, accommodation and maintenance.”

Mr. Kenny Cai, Director of Crystal Heights, added, “Despite the current low oil price environment, there are a large number of offshore platforms in the world that require more efficient and cost-effective solutions such as the use of a dedicated liftboat for their maintenance, upgrading as well as removal. Besides being utilized in the Gulf of Mexico and West Africa, they are also increasingly being employed by key operators in China, the Middle East and Southeast Asia.

“Building our first liftboat with a reputable shipyard will enable us to establish an early foothold in the market, especially in the Asian region which currently has the least number of liftboats available per platform. Having worked with Keppel on previous projects before, I am confident that we can look forward to receiving a best-in-class liftboat from them promptly and safely.”

Mr. Cai is a shareholder of TS Offshore and FTS Derricks which have contracted for a KFELS N Plus and a KFELS Super B Class jackup rig respectively currently being built in Keppel FELS.