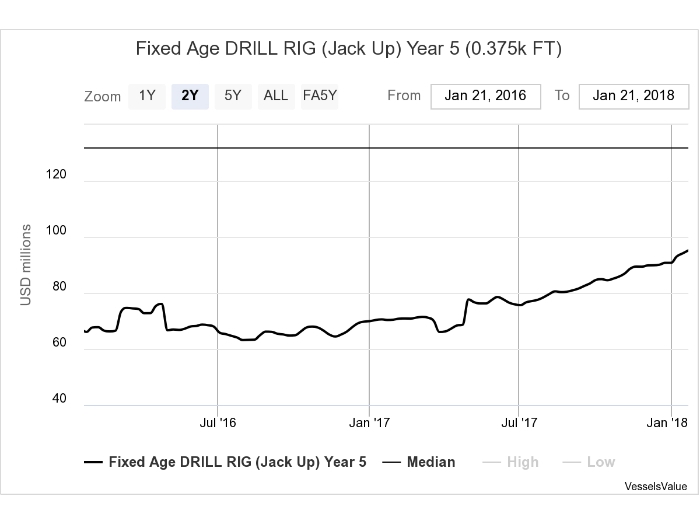 JANUARY 26, 2018 —Rising oil prices have increased interest in secondhand for jack-up rigs, pushing asset values up 36 percent from a year ago, according to data compiled by VesselsValue. VV’s Fixed Age Values for a 5-year-old Jackup Rig that was worth $69.9 million in January 2017 to $95.14 million today.

VesselsValue says that E & P spending should start to increase now that oil prices have shown a sustained period of strength, increasing demand for offshore equipment. Much of the spending will be directed to onshore exploration, but a portion will be directed at easily accessible offshore projects. This should benefit jackup rigs first before a market rebound for deepwater assets (Drillships and Semi-Subs).

The increase in oil prices is driving speculative interest in the market for Jackup rigs, and has helped boost the values of these units. While no new MODU newbuilding orders have been placed since July 2015, the resale market for Jack Up Newbuilds has increased over 2017. Eighteen newbuild rig contracts were resold, compared to a total of 25 resold in the 5 years previous. The majority (86%) of these resales since 2012 have been Jack Up rigs, with only a handful Semi-sub rigs or Drillships.

The valuations for some newer offshore support vessels (OSVs) are also rising. Assets in the OSV markets are seeing a recovery in valuation inline with the rising price of Brent indexed crude over the past seven months, reports VesselsValue’s Court Smith. Platform supply vessels (PSVs) make up the greatest number of units in the offshore fleet, and the lion’s share of its value.

A look back at the what a Large PSV was worth over the past 10 years or so gives a sense of the bleak landscape owners have faced. However, the tide appears to be turning. Rising oil prices are driving interest in expanding production at low cost offshore production regions, including the North Sea.

Transportation difficulties are continuing to plague North American production, increasing the discount these inland grades must be sold for, which in turn is limiting some upside growth in production. The need for offshore units is expected to increase over the next several years, pushing up asset values as market participants are looking to buy at the bottom of a cycle.

Values across the PSV segment are not moving in lockstep though. The premium for newer units has seen a more sustained rise, while 10-year-old vessels remain at $7.95 million, near their all-time low in the second quarter of 2017 of $7.07 million. Newbuild prices touched bottom in early 2016 at $18.47 million, but have risen by 40% to $25.97 million.

Currently over a quarter of the total offshore fleet is equal to its scrap value, 2034 of the 7,641 on the water. The scrap value of OSVs is not enough to encourage owners to break up older vessels given their low deadweight tonnage, but it does suggest that many may be past their prime service life. Newer vessels should maintain their value for the next several years due to the lack of orderbook activity since 2015.