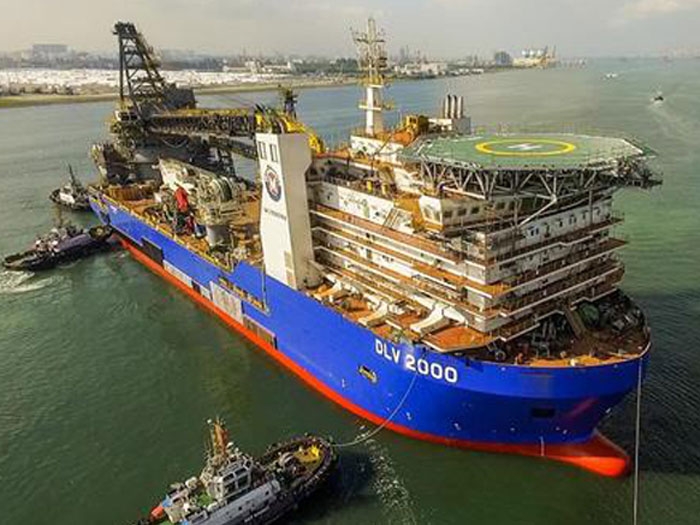 FEBRUARY 22, 2016 — McDermott International, Inc. (NYSE:MDR) says that the first work for its  new flagship derrick lay vessel, the DLV 2000, will be on the INPEX Ichthys LNG Project offshore Western Australia.

The DLV 2000 is a class 3 dynamically positioned vessel combining a 2,200-ton revolving crane with a deepwater S-lay pipelay system configured to install pipelines with diameters ranging from 4.5 to 60 inches in water depths up to 10,000 ft. The vessel can accommodate up to 400 personnel to facilitate large hook-up and commissioning projects and incorporates a 43,000 sq. ft. open deck to allow the transportation and assembly of large subsea structures; enabling safe and efficient stand-alone operations in remote areas.

The vessel is set to be named in a ceremony at Keppel’s Singmarine Shipyard in Singapore on Thursday, April 14, 2016 (see earlier story) and is expected to join the INPEX Ichthys project as part of McDermott’s 2016 current project schedule by installing large subsea spools, laying infield umbilicals and lifting several Subsea Distribution Units that will provide the hydraulic, chemical and electrical distribution from the umbilicals to the subsea drill centers.

Work is expected to be performed in conjunction with McDermott’s other new subsea installation vessel, the Construction Support Vessel 108 (CSV 108), which is already working successfully on the project. The CSV 108 is expected to undergo an upgrade later this year to install a Vertical Lay System and Reel Deployment System, also for use in the project and will then be referred to as Lay Vessel 108 (LV 108).

“It is an exciting time to see our newest subsea vessels working side-by-side on this landmark project,” said Hugh Cuthbertson, Vice President, Asia. “We look forward to this being a very successful start for the DLV 2000 and helping us deliver a successful project for our client, INPEX, and other project stakeholders as well as demonstrating the capability and versatility of the McDermott subsea fleet to the industry.”

McDermott anticipates several months of work for the DLV 2000 offshore Western Australia during the second and third quarters of 2016.