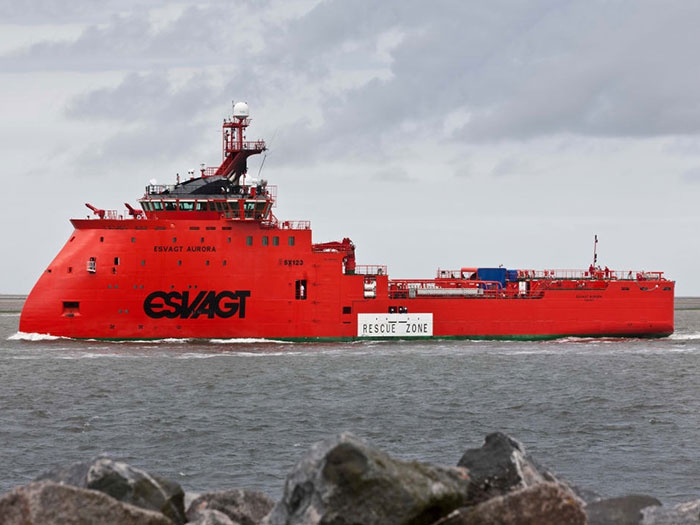 DECEMBER 7, 2018 — Esbjerg, Denmark, headquartered specialist offshore service vessel operator Esvagt sees growth opportunities as a result of expected higher oil and gas production from the Barents Sea. Reserves in the area are substantial: As recently as 2017, the Norwegian Petroleum Directorate updated its evaluation of the oil and gas reserves to over 17 billion barrels; a doubling of earlier estimates used so far.

Esvagt says it possesses the particular skills required for operating in Arctic regions. Five vessels in the fleet are able to operate in particularly harsh winter climates and are, for instance fitted with heated ladders and surfaces that can withstand icing. Among them is the Esvagt Aurora, which has worked in the Goliat field for Eni Norge since 2012.

‘It is on many levels challenging to work in the Arctic regions,” says Ole Ditlev Nielsen, Business Development Manager at Esvagt. “The cold can lead to icing and generally complicates operations. Additionally, it is almost dark throughout the day during wintertime, and the sudden polar low pressures with a particularly changing sea have to be taken into account. On top of that, multiple environmental considerations need to be respected, as the nature in the Arctic regions is extremely delicate.”

According to Nielsen, Esvagt’s experience in Arctic operations gives it a clear competitive advantage.

“It is a market with sharp requirements, and where knowledge and know-how are quite essential,” he says. “We have trained a lot in the area, worked actively with oil spill response, taken care of all support functions and been involved in successful rescue operations. Those experiences will be of great value to us, when the Barents Sea is further explored.”

In addition to the Esvagt Aurora, Esvagt has four smaller vessels that are similarly optimized for winter operations in demanding environments.