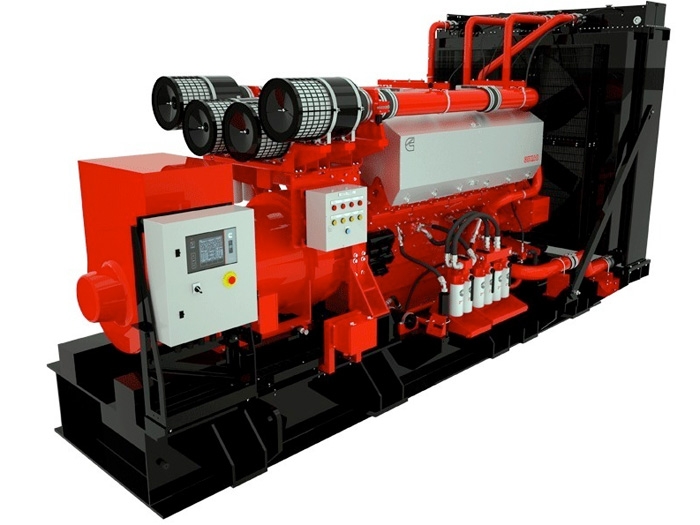 MAY 20, 2014 — Cummins Inc. (NYSE: CMI) says that the latest addition to its C Power product line is the QSK60 C Power (CP) emergency generator set. Engineered by the Cummins Center of Excellence for the demands of offshore applications, the QSK60 C Power genset is driven by the QSK60 marine auxiliary engine with MCRS fuel system. This engine has been used in diesel electric propulsion and power generation since 2008.

Cummins emergency generator sets feature a Cummins marine auxiliary engine fit with radiator cooling and two independent starting systems to assure the generator is capable of operating independently of all other ship’s systems.

The 60-liter genset is available with certificates from all the major marine classification societies and is compliant with the latest EPA and IMO emissions regulations.

Assembled at the Cummins Center of Excellence in Singapore, the 1,440 kWe package features a set-mounted radiator and a Stamford PM743E alternator from Cummins Generator Technologies, making it an ideal choice for deep-sea containers, bulkers and tank ships.

To meet Brazil’s local content requirements, the 1,800 kWe package is assembled at the Cummins facility in Rio de Janeiro and features a remote-mounted radiator and WEG GPA560 alternator. Cummins will provide 1,800 kWe emergency gensets for 14 drillships being built at Brazil’s Estaleiro Atlântico Sul (EAS) and Jurong Shipyard for Brazilian state oil company Petrobras; building began in late 2013 and will conclude in 2019.

C Power generator sets are backed by a comprehensive factory warranty that is valid and consistent worldwide, everywhere Cummins-authorized service is available. Plus, they are fully supported by the Cummins distribution network, featuring over 1,200 service outlets.

In addition to standard C Power genset packages, Cummins offers a wide range of customized power packages. All custom gensets feature a Cummins marine auxiliary engine from six and to 60 liters matched to the customer’s choice of alternator including components from Cummins own Stamford and AvK product lines, to meet power, application and local requirements.

All systems are tested to Cummins and classification society standards.