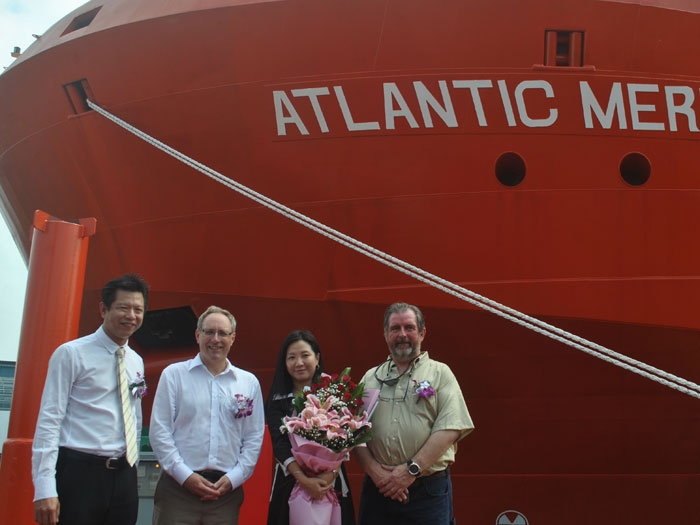 The 16,000 BHP vessel, built as Jaya Sovereign, was christened the Atlantic Merlin at a naming ceremony held in Singapore today and is a sister ship to the Atlantic Kestrel, which was delivered to Atlantic Towing in November 2012.

“The addition of this new vessel continues to add to our fleet’s capability and allows us to offer our customers, vessels that meet both current and expanding needs, as offshore oil and gas projects grow,” said Atlantic Towing Vice President Wayne Power.

“This delivery once again demonstrates our capabilities as builder of high quality vessels built to the most stringent international specifications,” said Jaya’s Chief Executive Officer Venkatraman Sheshashayee, “This delivery begins another busy period for us and is the first of four new buildings for Jaya in 2014 and the other three ships will be operated in Jaya’s growing fleet. This transaction is an important milestone for Jaya’s corporate development as it frees up a significant amount of cash to support our growth.

“Shortly, we will take delivery of another large anchor handler from our Singapore shipyard, the 150 tonner Jaya Majestic, a 12,000 BHP vessel, which is currently fitting out alongside in Tuas. We expect her to go out on sea trials in May. Jaya Majestic is another high specification DP2 vessel with two bow thrusters and two stern thrusters.

“We also have two Platform Supply Vessels (PSVs) delivering in the middle of the year from a third party yard, which are already contracted to go on charter to a new client in the Americas.

“In 2015, we take delivery of the most sophisticated subsea vessels we have ever built, Jaya Pinnacle and Jaya Prestige. These are under construction in our Batam shipyard, along with a third DP2 work boat. Jaya Pinnacle and Jaya Prestige will have deepwater active heave compensated cranes rated for 100 ton lifts as well as 100 man accommodations and large under deck capacities for speciality products such as methanol”.