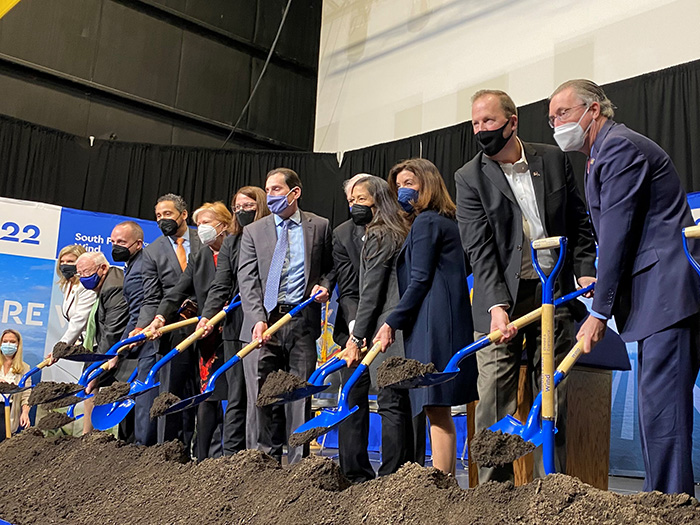 The second commercial-scale, offshore wind energy project approved for federal waters in the U.S., the South Fork project will be located offshore Rhode Island and New York and have a capacity of 130 megawatts of wind energy—enough to power over 70,000 homes and businesses.

“America’s clean energy transition is not a dream for a distant future—it is happening right here and now,” said Secretary Haaland. “Offshore wind will power our communities, advance our environmental justice goals, and stimulate our economy by creating thousands of good-paying union jobs across the nation. This is one of many actions we are taking in pursuit of the president’s goal to improve both the lives of American families and the health of our planet.”

“The harsh impacts and costly realities of climate change are all too familiar on Long Island, but today as we break ground on New York’s first offshore wind project we are delivering on the promise of a cleaner, greener path forward that will benefit generations to come,” said Hochul. “South Fork Wind will eliminate up to six million tons of carbon emissions over the next twenty-five years benefiting not only the Empire State, but our nation as a whole. This project will also create hundreds of good-paying jobs, helping spur economic growth across the region as we continue to recover from COVID-19. This is a historic day for New York, and I look forward to continue working with Secretary Haaland as we lead our nation toward a greener, brighter future for all.”

South Fork Wind is a 50-50 joint venture between Ørsted and Eversource. As the groundbreaking ceremonies were taking place, the two companies announced they had approved the final investment decision (FID) that codifies their commitment to the project.

“I’m very pleased we’re able to approve our first final investment decision on a U.S. offshore wind project and be at the forefront to contribute to New York’s ambitious offshore wind goals,” said Martin Neubert, Chief Commercial Officer and Deputy Group CEO at Ørsted. “The United States represents an important growth market for us, and with seven already-awarded U.S. projects accounting for approximately 5 gigawatts of clean offshore wind energy, Ørsted is leading the growth of a new sustainable industry that will create jobs and economic development along the East Coast and across the United States.”

“With this final investment decision, South Fork Wind demonstrates our commitment to creating clean energy, union jobs and local economic impact for Long Island, New York State, and states across the country,” said David Hardy, Chief Executive Officer of Ørsted Offshore North America. “While this project has the recognition as New York’s first windfarm, it is also one of the first of many in a promising future for offshore wind in the United States. I am grateful to the Biden administration, Secretary Haaland and Governor Hochul for their leadership and commitment to offshore wind as a source of clean power, to Eversource as our joint venture partner in South Fork Wind, and for the hard work and support of the many stakeholders who helped get us through the rigorous planning and permitting process.”

“With the joint final investment decision now in place, we have formally codified our commitment to New York’s first-ever offshore wind farm,” said Joe Nolan, president and CEO of Eversource Energy. “In less than two short years, South Fork Wind will provide enough clean energy to power more than 70,000 homes—helping New York reach its nation-leading clean energy goals and delivering good-paying local jobs to the state and region. We couldn’t be prouder that all the many years of careful planning and hard work by so many have now come to fruition.”