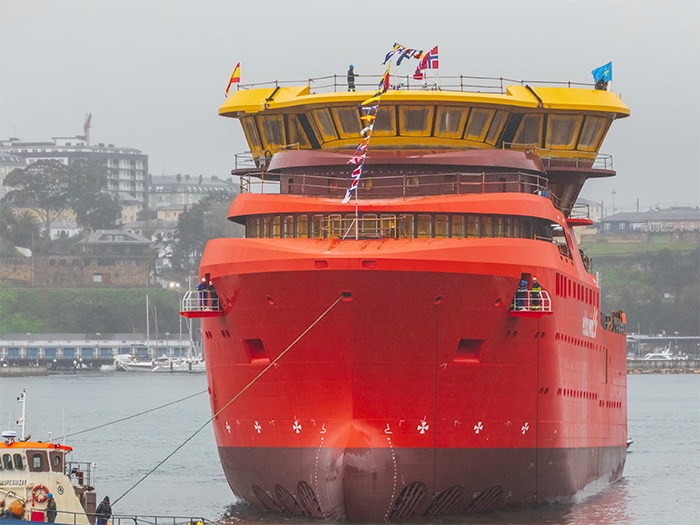 The Salt Design Edda Wind CSOVs are 88.3 meters long and can accommodate 120 persons.

Haugesund, Norway, headquartered offshore wind service company Edda Wind (OSL:EWIND) says that this Christmas it received a special gift from Spanish shipbuilder Astilleros Gondán S.A. It took the form of a Christmas eve launch of another commissioning service operation vessel (CSOV). The vessel, the C491, is of similar design as the others in a six vessel series being built for Edda Wind at Gondán.

The CSOVs, along with two SOVs being built at Astilleros Balenciaga, form the expansion program of Edda Wind with all vessels set for deliveries from now until 2025. All eight are being prepared for emissions-free operations with a hydrogen-based propulsion system based on the liquid organic hydrogen carrier (LOHC) concept. These vessels will join a fleet of totally ten vessels and serve as mother vessels for wind turbine technicians as they perform commissioning and maintenance work on offshore wind turbines.

The CSOVs are 88.3 meters long and can accommodate 120 persons in total while the two SOVs can accommodate 60 persons. All units have high-standard cabins and common areas.

“Launching of a vessel is always a special moment and not a usual Christmas activity,” say Edda Wind CEO Kenneth Walland. “Therefore, to observe the third of six sister vessels successfully launched is again an important milestone and a great achievement for and Edda Wind.”, says CEO of Edda Wind, Kenneth Walland.

““The first four of the new building series plus two existing vessels in the Edda Wind fleet are committed on medium- to long term contracts,” said Walland. “C491 is the first of four vessels scheduled for delivery from late 2023 until mid 2025 that so far are not committed. They will be delivered into a market that will have a high demand for these type of vessels for the foreseeable future, further increasing the attractiveness of these assets. We are currently observing significant increases in building and equipment costs and consider having vessels already on order and under construction as a great advantage for Edda Wind.”