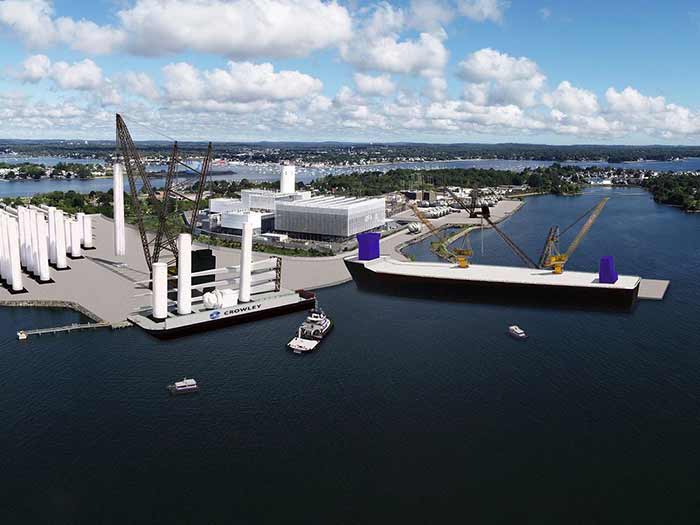 Construction of the offshore wind terminal is expected to start in summer 2023, with the terminal complete in 2025.

In the latest milestone toward the development of the second major offshore wind port terminal in Massachusetts, Crowley has completed the purchase of 42 acres in Salem.

The Salem Harbor Wind Terminal is a public-private partnership between Crowley and the city of Salem, with Avangrid serving as the port’s anchor tenant through its Commonwealth Wind and Park City Wind projects.

The terminal will be a logistics and operations center for turbine pre-assembly, transportation, staging activities and storage of assembly components. Crowley Wind Services, the company’s business unit dedicated to helping develop clean wind energy resources, will operate the terminal.

“By closing on the property, Crowley, the City of Salem, and Avangrid as the port’s anchor tenant, have moved one step closer to creating a dedicated port terminal to support the U.S. offshore wind industry’s growth,” said Bob Karl, senior vice president and general manager, Crowley Wind Services. “We will continue to focus on delivering a high performing terminal that the community can take pride in, providing economic opportunity and environmental sustainability.”

The terminal site project will result in the redevelopment of the former Salem Harbor Station, a decommissioned coal-fired energy plant, creating more than 800 jobs in the support of the construction and staging of wind projects and daily operations.

“Crowley’s acquisition of this site in Salem marks an important step forward for Massachusetts’ offshore wind industry and the development of the critical port infrastructure needed to build a clean energy future in the United States,” said Avangrid CEO Pedro Azagra. “The Commonwealth Wind project is a transformational opportunity that will bring substantial jobs, investment, and clean reliable energy to Massachusetts, and we are pleased to work with Crowley and the City of Salem as this important port project moves forward.”

“Crowley’s acquisition of this property represents a major milestone in our shared efforts to transform Salem Harbor into a world class offshore wind port,” said Salem Mayor Kimberley Driscoll. “I am grateful to both Crowley and Avangrid for their commitment to our partnership and to our community. This critical project will bring hundreds of good paying jobs and millions in direct investment to Salem and is critical to the Commonwealth’s ability to achieve our clean energy targets.”

Construction of the offshore wind terminal is expected to start in summer 2023, with the terminal complete in 2025.