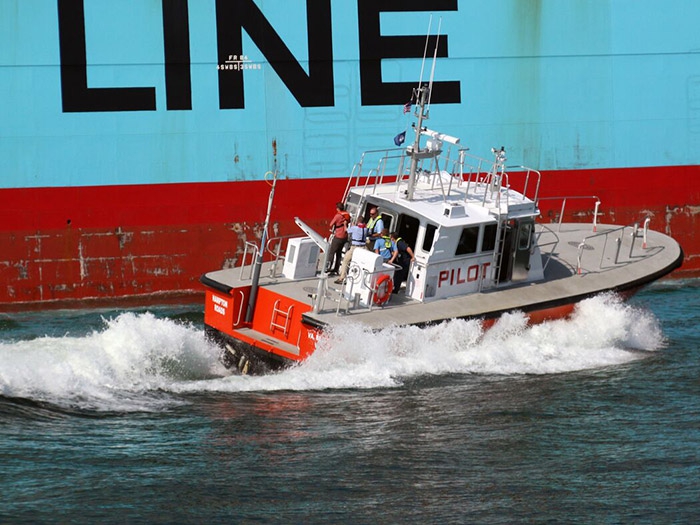 Pilot launch, named Hampton Roads, was delivered to the association's facility in Virginia Beach this summer and is now in full service

SEPTEMBER 4, 2018 — The newest addition to the Virginia Pilots Association boat fleet is powered by a propulsion system from Volvo Penta of the Americas that features twin 13-liter 900 hp U.S. EPA Tier 3 engines with IPS3 drive systems and Volvo Penta EVC electronic steering and control system with a three-axis joystick.

The IPS (integrated propulsion system) technology, which was pioneered by Volvo Penta, uses steerable pod drives with dual counter-rotating propellers integrated with underwater exhaust. The forward-facing propellers pull the boat through the water rather than pushing.

Designed by C. Raymond Hunt Associates and built by Gladding-Hearn Shipbuilding, Somerset, MA, the 55 ft seagoing pilot launch, named Hampton Roads, was delivered to the association’s facility in Virginia Beach this summer and is now in full service, delivering pilots to offshore ships preparing to enter port. The pilots, who are experts in the local shipping channels and harbor facilities, are responsible for navigating and maneuvering the large ships to their berths.

The Virginia Pilot boats operate every day around the clock in extreme weather and sea conditions, including hurricanes, northeasters and dense fog delivering pilots to ships entering the Hampton Roads harbor. The Association completes more than 7,000 ship boardings per year.

“When it came to specifying the engine system for our new pilot boat, our chief criteria were stability, safety, reliability, service support, speed and efficiency,” said Virginia Pilots Association spokesman Frank Rabena. “We did our research and discovered the Volvo Penta D13 with IPS3 met those needs and more. We learned that the Tampa Bay Pilots Association had taken delivery of a Gladding-Hearn Chesapeake-class boat with IPS, so we made a trip to Florida to experience it firsthand. The benefits of IPS were obvious.”

“Compared to traditional inboard shafts, the Volvo Penta IPS gives us better control over the boat’s movement, making it easier and safer to maneuver the boat alongside a large ship in heavy seas and high winds, so the pilot can climb aboard the ship safely to navigate it into port,” he added.

The Volvo Penta IPS has been consistently shown to provide 20 percent faster speed, 30 percent lower fuel consumption, and 15 percent faster acceleration when compared to a traditional inboard shaft system. It also reduces noise and vibration levels onboard by 50 percent.

Peter Duclos, president of Gladding-Hearn, pointed out another benefit of designing a boat with the Volvo Penta IPS. “With IPS, the propellers and drive components are close-coupled to the engines, enabling us to move the deckhouse further aft. This gives a larger foredeck and more enclosed space. It also provides easier access to the machinery through a deck hatch behind the wheelhouse.”

Ron Huibers, president of Volvo Penta of the Americas, which has its U.S. headquarters in Chesapeake, VA, said, “Maritime pilots and crew need a propulsion solution that is as tough as the job they do and IPS has earned the designation of being the go-to source among pilot associations across the country. We believe this traction will continue as more partners such as the Virginia Pilots Association realize the benefits our total offering can provide.”

“We are seeing increasing demand for IPS in new vessel orders from pilot associations around the world,” said Duclos. “It is a truly transformative technology which we believe will rapidly become the de facto standard in pilot launch propulsion in the future.”