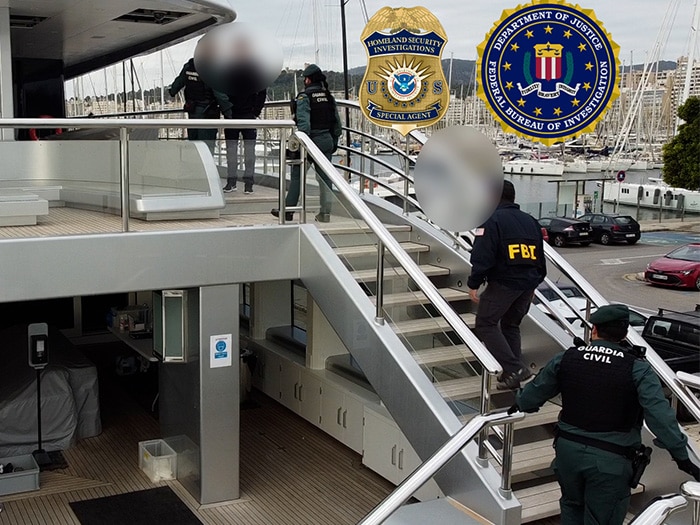 Guardia Civil released this photo of seizure of oligarch's yacht

Spanish authorities acted pursuant to a request from the U.S. Department of Justice for assistance following the issuance of a seizure warrant, filed in the U.S. District Court for the District of Columbia, which alleged that the Tango was subject to forfeiture based on violation of U.S. bank fraud, money laundering, and sanction statutes.

Separately, seizure warrants obtained in the U.S. District Court for the District of Columbia target approximately $625,000 associated with sanctioned parties held at nine U.S. financial institutions. Those seizures are based on sanctions violations by several Russian specially designated nationals.

“Today marks our taskforce’s first seizure of an asset belonging to a sanctioned individual with close ties to the Russian regime. It will not be the last,” said Attorney General Merrick B. Garland. “Together, with our international partners, we will do everything possible to hold accountable any individual whose criminal acts enable the Russian government to continue its unjust war.”

The seizure was coordinated through the Justice Department’s Task Force KleptoCapture, an interagency law enforcement task force dedicated to enforcing the sweeping sanctions, export restrictions, and economic countermeasures that the United States has imposed, along with its allies and partners, in response to the Russian invasion of Ukraine.

“The seizure of this luxury yacht demonstrates our determination to hold accountable those who support Vladimir Putin’s unwarranted invasion of another sovereign nation,” said U.S. Attorney Matthew M. Graves for the District of Columbia. “We will continue to use every tool to enforce the sanctions aimed at Putin’s regime and the oligarchs who support it. Working with our federal and international partners, we will be unflagging in our efforts to bring to justice those who violate these sanctions, and to seize assets where appropriate and lawful.”

“Today’s seizure of Viktor Vekselberg’s yacht, the Tango, in Spain is the result of an unprecedented multinational effort to enforce U.S. sanctions targeting those elites who have enabled Russia’s unprovoked and illegal invasion of Ukraine,” said Director Andrew Adams of Task Force KleptoCapture. “For those who have tied their fortunes to a brutal and lawless regime, today’s action is a message that those nations dedicated to the rule of law are equally dedicated to separating the oligarchs from their tainted luxuries. This seizure is only the beginning of the Task Force’s work in this global effort to punish those who have and continue to support tyranny for financial gain.”