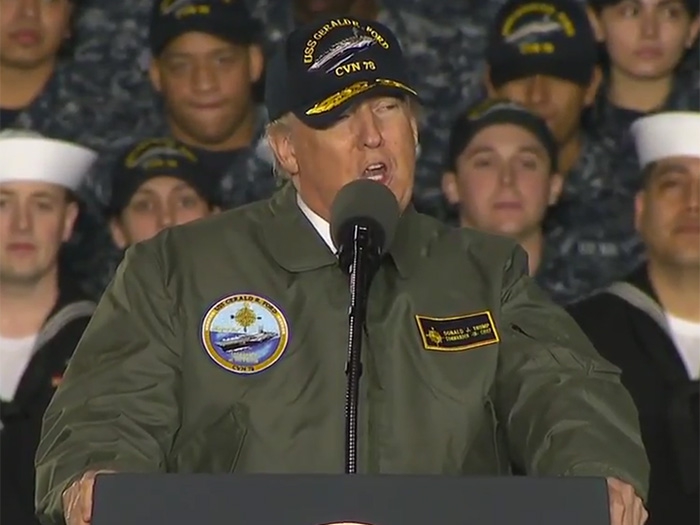 MARCH 2, 2017 — In a speech today aboard the aircraft carrier Gerald R. Ford (CVN 78) which is nearing completion at Huntingdon Ingalls Newport News Shipbuilding, President Donald Trump said that the U.S. Navy is “going to soon be the largest it’s been” and that his plans to undertake a major expansion of the entire Navy fleet, included “having the 12-carrier Navy we need.”

Following is the transcript of the President’s speech, as released by the White House.

Or scroll down for the YouTube video of the ABC live feed from the event.

THE PRESIDENT: Thank you. Thank you very much. What an honor. They just gave me this beautiful jacket. They said, here, Mr. President, please take this home. I said, let me wear it. (Laughter.) And then they gave me the beautiful hat, and I said, you know, maybe I’ll do that. We have a great “Make America Great Again” hat, but I said, this is a special day, we’re wearing this. Right? (Applause.) I have no idea how it looks, but I think it looks good. It’s a great-looking hat — just like this is a great-looking ship.

Thank you. I’m privileged to stand here today with the incredible men and women of the United States Navy. (Applause.) American sailors are the best warfighting sailors anywhere in the world. And it’s not even close. And, Susan, I am so glad you could be with us. I know how hard you work — 17 visits. And she wanted things done right, I will tell you. They told me she wanted this one done right, in honor of both of her parents, who were great, great people. And we wanted to introduce this beautiful vessel to the American people. And I wanted to be here, I wanted to be with you. So, Susan, and to your family — unbelievable job. Unbelievable. (Applause.)

The soon-to-be commissioned Gerald R. Ford USS — what a place. It really feels like a place. You stand on that deck, and you feel like you’re standing on a very big piece of land. But this is better than land. It will not only be a great symbol of American strength, but a great legacy for your father, and our former President, Gerald Ford.

President Ford was a Navy man. By the way, he was also a great athlete, for those of you that didn’t know. He saw action in the South Pacific during World War II. He served this country with honor — in the military, in Congress, and in the White House. The proud dignity of this ship is a fitting tribute to Gerald Ford, the man and the President.

We are joined today by General Mattis, now Secretary Mattis — (applause) — where is he? — who will be charged with overseeing this great rebuilding of our military might. We will give the men and women of America’s armed services the resources you need to keep us safe. We will have the finest equipment in the world — planes, ships and everything else. We are going to have, very soon, the finest equipment in the world. (Applause.)

We will give our military the tools you need to prevent war and, if required, to fight war and only do one thing — you know what that is? Win! Win! (Applause.) We’re going to start winning again.

Admiral John Richardson, Chief of Naval Operations, is with us today as well — great gentleman. Admiral, we’re going to ensure our Navy has the resources, personnel training and equipment — the kind of equipment that you need. So, congratulations, Admiral. And a lot more is coming. (Applause.)

Let me congratulate Captain Richard McCormack, Commanding Officer of the Gerald R. Ford. This ship will make an extraordinary addition to the fleet like no other — like no other. Anywhere in the world there’s nothing like this. It represents the future of naval aviation. I have no greater privilege than to serve as your Commander-in-Chief and the Commander-in-Chief of the men and women of the United States military. Great people. (Applause.) Great, great people.

To those who serve our nation in uniform and to those who build the instruments of our defense, I thank you on behalf of our nation.

Our carriers are the centerpiece of American military might overseas. We are standing today on 4.5 acres of combat power and sovereign U.S. territory, the likes of which there is nothing to compete. There is no competition to this ship. It is a monument to American might that will provide the strength necessary to ensure peace. This ship will carry 4,500 personnel and 70 aircraft, and will be a vital component of our defense. This carrier and the new ships in the Ford class will expand the ability of our nation to carry out vital missions on the oceans to project American power in distant lands. Hopefully, it’s power we don’t have to use, but if we do, they’re in big, big trouble. (Applause.)

This great aircraft carrier provides essential capabilities to keep us safe from terrorism and take the fight to the enemy for many years in the future. The great Admiral Nimitz, who commanded the U.S. Pacific fleet through the Second World War, once said, “It is the function of the Navy to carry the war to the enemy so that we’ll not be fought on U.S. soil.” True. (Applause.) And it was under Admiral Nimitz’s command 75 years ago this June that the Navy did just that at the Battle of Midway. You’ve all known about the Battle of Midway, where the sailors of the U.S. Navy fought with the bravery that will be remembered throughout the ages. Storied bravery throughout the ages.

The backbone of the American fleet at Midway was three beautiful aircraft carriers: the Yorktown, the Enterprise and the Hornet. All three were built with American hands right here at the Newport News Shipyard. (Applause.) At Midway, America was greatly outnumbered by, I mean, a lot — (laughter) — and its fleet badly damaged. But the heroic deeds changed the course of history. Many brave Americans died that day, and, through their sacrifice, they turned the tide of the Pacific War. It was a tough tide, it was a big tide, it was a vicious tide, and they turned it.

Countless other Americans in that war, some of them parents and grandparents to people in this room today, came home thanks to their very heroic deeds. The sailors at Midway are part of a long line of American heroes, an unbroken chain of patriots from each generation to the next, who rose to defend our flag and our freedom.

That legacy continues today as American warriors protect our people from the threat of terrorism. On Tuesday, in my address to a joint session of Congress, I asked Congress to eliminate the defense sequester and to support my request for a great rebuilding of the United States military and the United States Navy. (Applause.)

After years of endless budget cuts that have impaired our defenses, I am calling for one of the largest defense-spending increases in history. And by eliminating the sequester and the uncertainty it creates, we will make it easier for the Navy to plan for the future and thus to control costs and get the best deals for the taxpayer, which, of course, is very important, right? Got to get a good deal. If we don’t make a good deal, we’re not doing our job.

Our military requires sustained, stable funding to meet the growing needs placed on our defense. Right now, our aging frontline strike and strike-fighters — the whole aircraft; many, many aircraft — are often more likely to be downed for maintenance than they are to be up in the sky. Our Navy is now the smallest it’s been since, believe it or not, World War I. Don’t worry, it’s going to soon be the largest it’s been. Don’t worry. (Applause.) Think of that. Think of that.

In these troubled times, our Navy is the smallest it’s been since World War I. That’s a long time ago. In fact, I just spoke with Navy and industry leaders and have discussed my plans to undertake a major expansion of our entire Navy fleet, including having the 12-carrier Navy we need. (Applause.)

We also need more aircraft, modernized capabilities, and greater force levels. Additionally, we must vastly improve our cyber capabilities. This great rebuilding effort will create many jobs in Virginia, and all across America, and it will also spur new technology and new innovation.

America has always been the country that boldly leads the world into the future, and my budget will ensure we do so and continue to do exactly that. American ships will sail the seas. American planes will soar the skies. American workers will build our fleets. (Applause.) And America’s military will ensure that even though the darkest nights and throughout, a bright and glowing sun will always shine on our nation and on our people. Our Navy is great. Our Navy is great. Our people are great. Great. (Applause.)

Our Republic will meet any challenge, defeat any danger, face any threat, and always seek true and lasting peace.