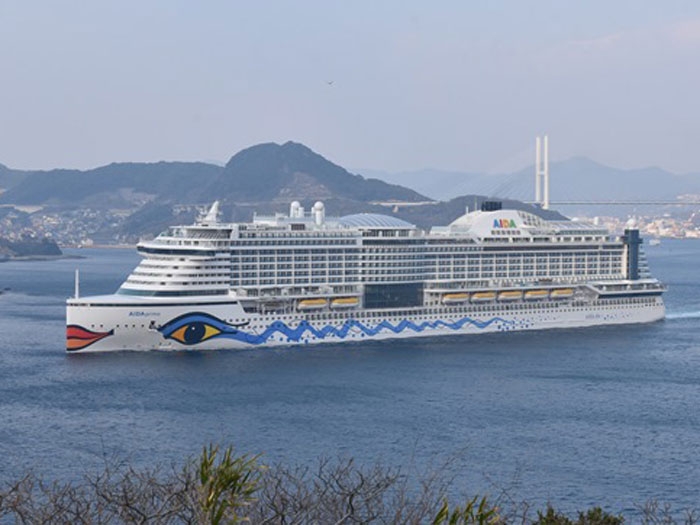 MARCH 14, 2016— There were no doubt sighs of relief as well as happy smiles at Mitsubishi Heavy Industries, Ltd. (MHI) today as the shipbuilder completed delivery of the AIDAprima, the first of two large cruise ships being built at its MHI’s Nagasaki Shipyard & Machinery Works for Carnival Corporation’s German market brand AIDA Cruises.

Originally the vessel was set for delivery in the first half of 2015, however the date was twice postponed as the yard ran into problems that included a “volume of design work relating to cabins and other areas [that] was vast beyond expectation” leading to changes, increased costs and delays. There were also a couple of small fires.

MHI has booked two extraordinary losses, totaling more than $912 million, on the project.

“Given the cutting-edge nature of the ship, construction was challenging but ultimately we built a cruise ship of the very highest quality, offering superior comfort and entertainment features for passengers,” said Shunichi Miyanaga, MHI President and CEO, in remarks at the hand-over ceremony. “We are proud to deliver AIDAprima, the first of a new generation of energy-efficient cruise ships superbly equipped to provide a fantastic cruising experience. It provided us with many key learnings to enable a smoother construction process for future vessels – starting with AIDAprima’s sister ship.”

The 3,286 passenger ship, which is now headed for Hamburg, is not only the largest in the AIDA fleet but is one of the world’s most technically advanced and greenest cruise ships. It is, for example, the first cruise ship with a hull equipped with the air bubbling Mitsubishi Air Lubrication System (MALS).  It is powered by three MaK 12V M43C engines and one dual-fuel MaK M46DF capable of burning LNG delivering a total 53,150 hp. It also has a new air-conditioning system that saves on energy consumption by using waste heat.

The AIDAprima is scheduled to commence its first regular cruise from Hamburg on April 30, including port stops in Rotterdam (Netherlands), Zeebrugge (Belgium), Le Havre (France) and Southampton (United Kingdom). Its official public presentation in Europe will take place at a christening ceremony to be held on May 7 as part of the 827th Hamburg Port Anniversary celebrations taking place from May 5 through 8.Construction of the second of the two ships will now be streamlined leveraging the knowledge gained from building the AIDAprima.

Felix Eichhorn, President of AIDA Cruises, speaking at the  delivery ceremony, said: “20 years ago, AIDA launched its concept of modern cruising. With our new flagship and the three newbuilds to follow, the company will continue to provide important growth impulses for the German cruise market. We are once again charting new territory by being the first German cruise line to offer cruises starting from Germany the whole year round. I am convinced that we will reach new guest groups with our unique variety of offerings aboard AIDAprima.”

The AIDAprima has 18 decks, is 300 meters in overall length, and has a gross tonnage of 125,000 tons. Among its numerous indoor public amenities are a three-story multi-purpose theater in the center of the ship’s atrium, 12 restaurants, 18 bars, shops, a 3,100 sq.m “Body & Soul” area, discotheque, casino and micro-brewery. The uppermost deck has two swimming pools under large domes (one with a water slide) and an ice skating rink.