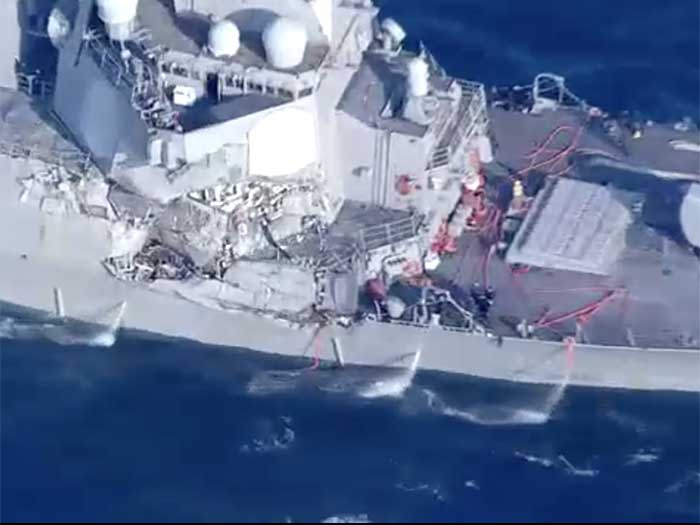 JUNE 16, 2017 —The Navy reports that the Arleigh Burke class destroyer USS Fitzgerald (DDG 62) was involved in a collision with a merchant vessel at approximately 2:30 a.m. local time, June 17, while operating about 56 nautical miles southwest of Yokosuka, Japan.

The U.S. Navy has requested Japanese Coast Guard assistance in responding to the collision.

Later tweets from the Navy said “Extent of damage is being determined. #USSFitzgerald experienced flooding in some spaces” and “No reports of casualties at this time.”

Japanese broadcaster NHK showed brief aerial footage indicating what appears to be substantial damage to the destroyer and reported the merchant ship as being the 222.6 m Philippine-flagged containership ACX Crystal.

According to the Equasis data base, the ACX Crystal is a 2008-built containership managed by Sea Quest Ship Management Inc of the Philippines.

NHK said that a message from the containership reporting a “Collision with a U.S. Navy ship” was reported to the 3rd Japanese Regional Coast Guard Headquarters off the coast of Ichirozaki in Minamiizu-cho, Shizuoka Prefecture, at 2:30 am local time.

You can see the NHK video HERE