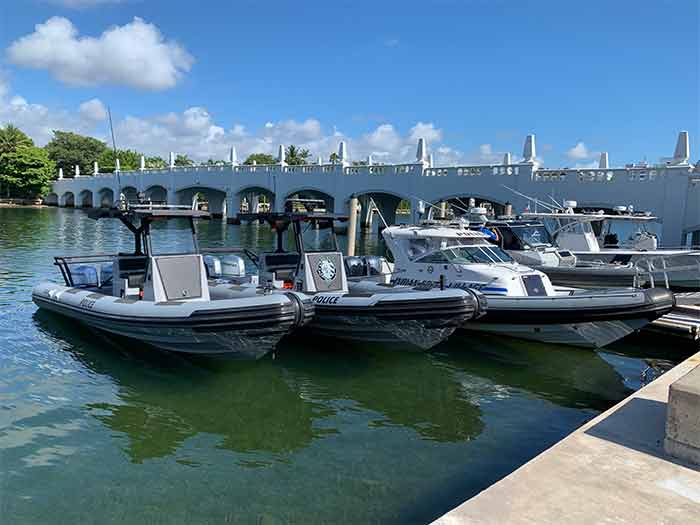 Fluid Watercraft has seen a rise in demand for patrol craft from agencies across the U.S.

Fort Lauderdale, Fla, based rigid inflatable boat (RIB) builder Fluid Watercraft says that police departments across the U.S are increasing their patrol boat fleets in response to a surge in recreational boating activity that has followed the outbreak of the COVID-19 pandemic.

Reflecting this trend, Fluid Watercraft’s recent deliveries have included a 28-foot Patrol 880 to the Hollywood, Fla., police department and two 25 foot Patrol 780s, one to the Ottawa, Mich., Sheriff’s office and the other to the Baltimore, Md., Police Department.

“We’ve seen an increase in the need for RIBs on the market, especially at the commercial level,” says Boyd Tomkies, CEO of Fluid Watercraft. “The unique design of our patrol boats helps provide a greater operational workflow, and in turn a safer mission.”

The newest addition to Hollywood Police Department’s marine unit—the Patrol 880—arrived just in time for peak boating season in South Florida. According to the United States Coast Guard, the state of Florida found that nearly 10% of boating accidents involved alcohol as a contributing factor, the highest percentage of any state

“Here in South Florida, we are recognized as the boating capital of the world. As the City of Hollywood is a coastal community – that includes almost seven miles of beachfront and Intracoastal Waterways running through our city along with additional inland waterways – having officers on the water goes without saying,” says Christian Lata, an officer at the Hollywood Police Department.

The new Hollywood PD boat is equipped with twin 225 horsepower motors, allowings quick response to medical emergencies, immobilized vessels, collisions, and other conflicts that may occur on the water.

“When it was time to update our maritime patrol vessels, we chose Fluid Watercraft. We needed quality and reliability. Having good reliable vessels allows us to patrol the waterways, while educating our citizens, and assuring their safety,” says Lata.

Facing similar circumstances with the uptick in powerboat sales, the Ottawa Sheriff’s Office and Baltimore Police Department also expanded their marine fleets. Both opted for the 25-foot, 7-inch Patrol 780, rigged with a 300 hp. engine that allows the boat to reach top speeds of 55 mph.