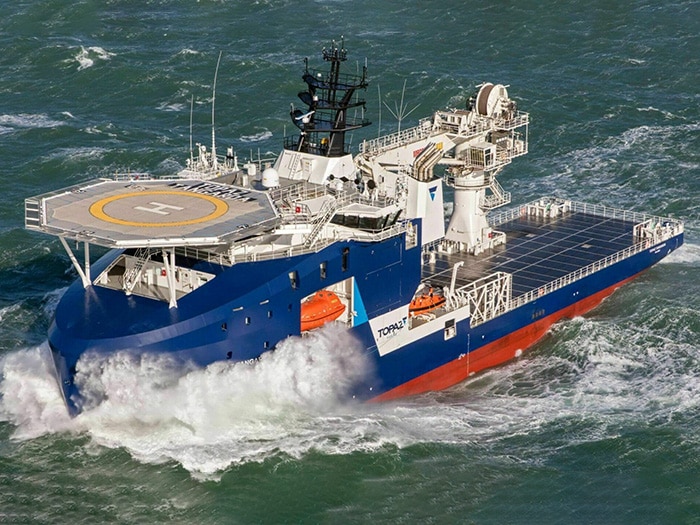 As last year’s incident involving the Nordstream pipeline in the Baltic underscores, subsea infrastructure can be extremely susceptible to sabotage. The U.K. is taking the problem sufficiently seriously that last November it accelerated plans to acquire two specialist ships to convert to Multi-Role Ocean Surveillance (MROS) vessels and shelved plans to build a new national flagship that would fill the role once played by the royal yacht Britannia.

The first of the two vessels to be converted arrived at the Cammell Laird shipyard in Birkenhead yesterday. It is the subsea construction vessel Topaz Tangaroa, originally delivered from outfitting yard Vard Brattvaag in Norway in December 2019.

Following a formal handover to the Royal Navy in the coming days, the ship will undergo a period of military modification and is due to be operational this summer

Once operational, the ship will be dedicated to safeguarding seabed telecommunications cables and oil and gas pipelines. The 98 meter long vessel will act as a mother ship, operating remote and autonomous offboard systems for underwater surveillance and seabed warfare.

At Cammell Laird, the ship will be repainted and have critical military equipment installed, before being handed over for operation by the Royal Fleet Auxiliary (RFA) later this year.

Due to be renamed as it joins the RFA fleet the vessel was selected to meet the requirements of the Royal Navy, having been built to support a mix of underwater operations, including work on oil rigs, construction, maintenance and inspection work, as well as autonomous submarine operations.

The 6,000-tonne vessel is equipped with a helipad, crane, and expansive working deck and features a moon pooll in the underside of the hull through which submersible capabilities can be launched.

It will be crewed by around two-dozen RFA sailors, while around 60 Royal Navy specialists will operate the undersea surveillance systems and other survey and warfare systems when embarked.

The program for the acquisition of a second subsea protection ship is currently in concept phase.