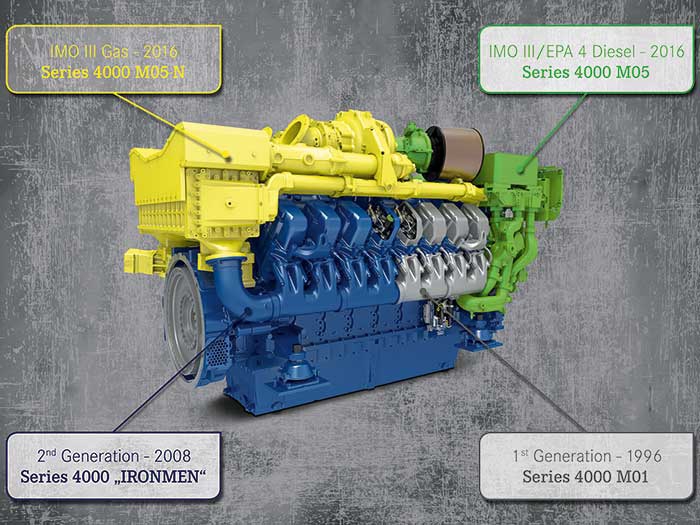 The MTU exhibit presented at SMM 2016 shows the development from the origins of the Series 4000 into a modern green and high-tech propulsion system in one engine. This includes the original Series 4000 diesel engine versions M00 to M01 (grey) as well as the engine version M03 commonly known as Ironmen (blue). The new version M05 is also illustrated (green), which will meet IMO III and EPA Tier 4 emission legislation and the new MTU gas engine (yellow).

AUGUST 26, 2016 — Rolls-Royce is celebrating the twentieth anniversary of the MTU Series 4000 engine.

Since its launch at the SMM event in Hamburg in 1996, more than 37,000 of the engines have been sold worldwide, completing 180 million operating hours.

The engines were the first of their kind to be fitted with common rail injection as standard and the Series 4000 has gone on to become MTU’s biggest selling engine in production.

“Even today, 20 years after it was first launched on the market, the advanced design Series 4000 diesel engine and the new gas engine for marine applications which is also based on the Series 4000 engine, are the leading technologies in the marketplace,” says Knut Müller, Head of the Marine and Government Business Division at MTU.

At next month’s SMM, Rolls-Royce Power Systems will present an exhibit on Stand 305 in Hall 3A showing the development of the Series 4000 from its origins in marine applications to a modern green and high-tech propulsion system.

In 2008, the Ironmen engine was launched. This extremely robust and cost effective version of the Series 4000 engine was developed specifically for work boats, with its low fuel consumption and long maintenance intervals playing a major role in creating the company’s strong presence in this market.

The series is based on the principle of a robust basic engine available in a variety of cylinder versions so that it can be used in marine and energy applications, and in off-highway vehicles.

When the designers began to develop the technical concept in 1992, the specifications for the new engine were clear: low complexity, long maintenance intervals, low operating costs and a long service life compared with its successor engines. These features have had a powerful influence on succeeding generations of the Series 4000 engine.

With a volume per cylinder of between four and five liters (4.06 – 4.77 liters), the Series 4000 engines were the logical further development of the MTU Series 396 engine. Today, they are available with power outputs from 746 to 4,300 kW. Their basic design results in an outstanding power-to-weight ratio and compact dimensions. Due to the combination of key technologies such as turbocharging, exhaust gas aftertreatment and common rail injection, Series 4000 engines remain among the most advanced propulsion technologies available in the market.

The common rail injection technology developed by MTU subsidiary L’Orange that is incorporated in Series 4000 diesel engines is now in its fourth generation. In use by MTU long before its introduction into the automotive industry, the system makes it possible to electronically control all the injection parameters that have an influence on the combustion process, regardless of the speed of the engine.

Compared with the systems that were previously available, this resulted in a considerably higher injection pressure of 1,400 bar. Today’s fourth generation of this technology achieves 2,200 bar in marine applications. Common rail technology reduces exhaust emissions and fuel consumption and in 1996, the Series 4000 achieved a 10 per cent consumption reduction compared with rival products available at the time.

From 2018, MTU will have engines available that have been further optimized for fuel efficiency and will deliver even more enhanced performance, meeting current environmental requirements and emission regulations.

“This shows once again that Rolls-Royce remains true to its guiding principle of designing propulsion solutions that offer customers the greatest possible benefit and meet the highest possible standards,” says Knut Müller.