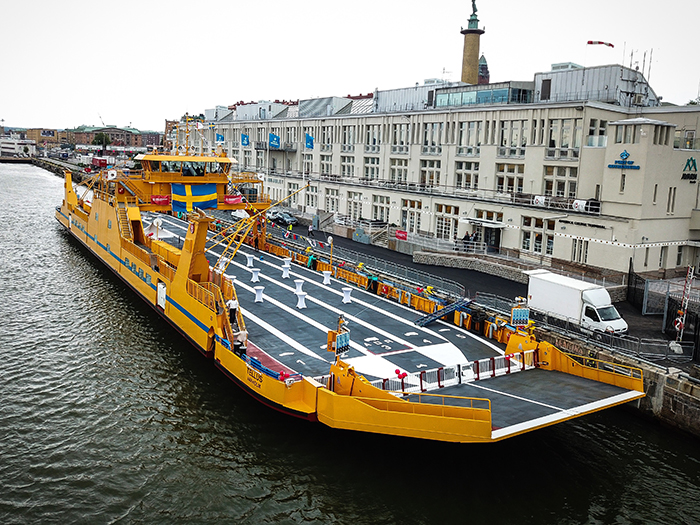 Tellus will operate primarily in all electric mode

Tellus will operate on one of Sweden’s busiest maritime routes, with over 100,000 vehicles transported per month, the majority being heavy trucks. The 100 meter ferry will be capable of carrying up to 297 passengers and 80 cars per journey on the 1.8 km Gullmarsleden route linking Uddevalla to Lysekil.

In its third cooperation of this kind with the shipbuilder, Danfoss Editron delivered the electric power plant and propulsion system. The lightweight electric powerplant is connected to the 12 battery-racks, provided by Corvus batteries, which have a total capacity of 949 kWh. The batteries are currently charged at night via an on-shore charging station and can also be charged by diesel engines while the ferry is in operation. This temporary solution will be replaced by automatic charging stations at the ferry terminals, once the infrastructure is ready.

In addition to controlling the ferry’s propulsion, the Editron load control system automatically supervises the power plant and ensures that fuel consumption is optimized at all times, even when the ferry is not operating on fully-electric mode only. When in hybrid-electric mode, the ferry will operate on a single genset, with the rest of the propulsion supported by battery power.

The Editron control system’s separation operation mode ensures that the ferry’s captain can easily choose the most appropriate operation mode and swiftly switch between them if necessary.