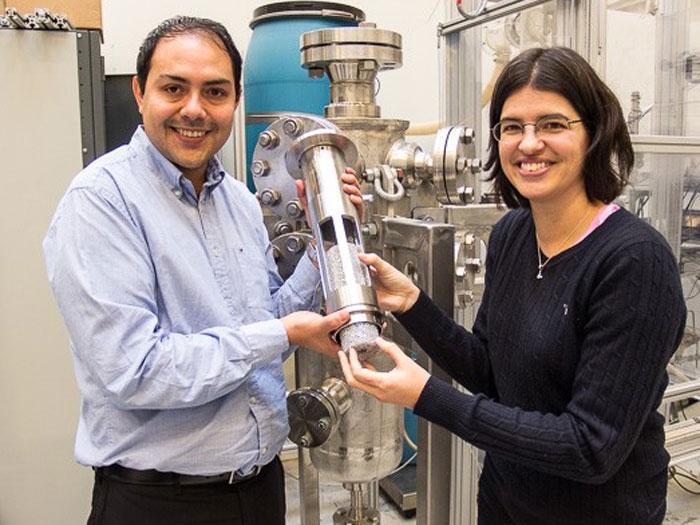 Carlos Dorao and Maria Fernandino with a model of their hybrid centrifuge, the Lynx Separator

SEPTEMBER 8, 2015 — Though marine exhaust gas scrubbers do the job, shipowners and shipyards would be lot happier if they were smaller, lighter and cost less.

Called the Lynx Separator, the technology now being examined for possible use in marine exhaust gas scrubbers was originally developed for use in the natural gas industry and involves using a steel sponge along with centrifugal force to remove the fluid from a gas stream, offering a brand new solution for the gas industry.

The aim is to develop a scrubber that is half the size of those currently being used.

The Lynx Separator is being developed through InnSep AS, a company established by the NTNU’s Department of Energy and Process Engineering in 2011.

In the Lynx Separator, wet gas flows through the separator. A tubular metal sponge spins rapidly so the liquid is separated from the gas and thrown to the side and down, allowing dry gas to stream up to where it’s needed.

The MAROFF pilot project irrigated simulated exhaust with saltwater, before being separated by the rotating metal foam cells in the Lynx technology. The theoretical calculations and testing show promising results for this cleaning treatment.

The pilot project has tested liquid at 20-30 degrees. Since ship exhaust typically ranges from 60-70 degrees, one of the goals is to incorporate heat exchangers into the developing technology.

Next, InnSep will take the pilot project results to market players and figure out the fastest and cheapest ways to integrate the technology.