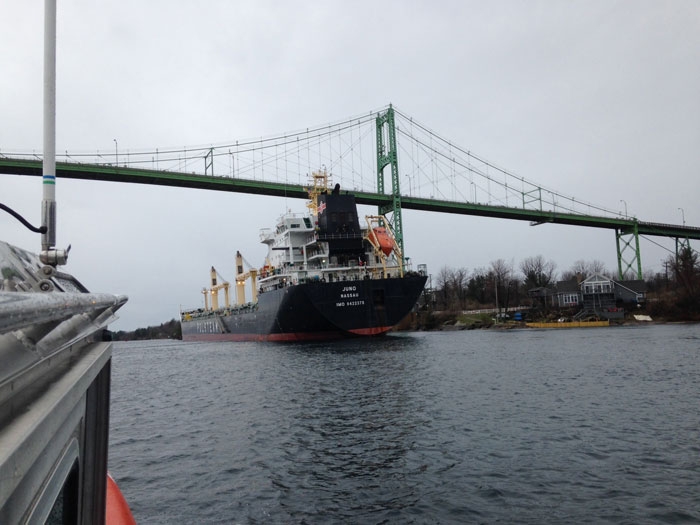 The motor vessel Juno, a 621-foot bulk carrier, sits aground under the Thousand Islands Bridge, April 20, 2015. The vessel ran hard aground after suffering a steering casualty

APRIL 21, 2015 — The Coast Guard is responding to a 621-foot bulk carrier which ran aground in the vicinity of Wellesley Island, in the St. Lawrence River, New York, Monday. Vessel navigation has been suspended in the vicinity of the grounding, with other vessels in the area waiting for the navigational channel to re-open.

Local media reported this morning that tugs are on the way from Montreal to assist the 29,707 dwt Juno, which is managed by Polska Zegluga Morska of Szczecin, Poland.

The Coast Guard reported the vessel as taking on water in one of the forward ballast tanks and slightly listing to port with 18-feet of water in the forward peak of the vessel. There are no reported injuries to the crew, and no reported pollution.

The Bahamian-flagged bulk carrier was transiting inbound with a cargo of sugar from the St. Lawrence Seaway to the Port of Toronto.
At about 1:10 a.m. yesterday, a watchstander at Coast Guard Sector Buffalo received a report from the Saint Lawrence Seaway Development Corporation of a bulk carrier that was hard aground in the vicinity of the Thousands Islands Bridge. The vessel did not come in contact with the bridge.

Coast Guard marine inspectors from the Coast Guard Marine Safety Detachment Massena, New York, are on board the Juno with SLSDC representatives conducting an initial investigation along with the SLSDC. A crew from Coast Guard Station Alexandria Bay responded to enforce the waterway closure and monitor the situation.

According to Coast Guard District 9, the incident occurred after the vessel suffered a steering casualty.