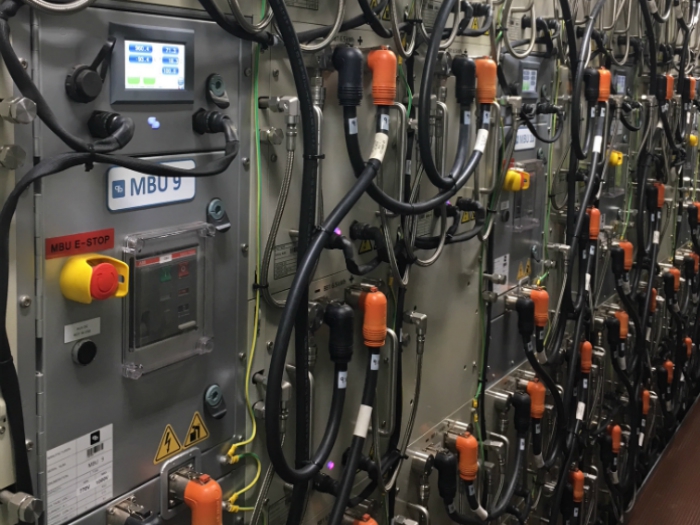 Energy Storage Systems supplied by PBES aboard the Elektra, an all-electric car ferry operating in Finland

FEBRUARY 16, 2018  — Each year there are more and more hybrid or fully electric ships navigating waters worldwide. Some estimate that all modern commercial vessels will soon have some form of energy storage on board. These ships range in type from ferries transporting thousands of people daily, to Offshore Supply Vessels that maintain safety in critical oil rig operations. These ships increasingly rely on lithium energy storage as their power source, with modern designs containing over 1,000 individual modules (batteries).  The technology has proven itself reliable and powerful, however safety concerns still linger and should be kept at the utmost of considerations for this new technology.

Not all battery systems are equipped with the same safety systems. Testing and certification for battery systems aboard ships has increased, but room remains to raise the bar higher. As a member of the first team that brought energy storage to large marine projects, here is what is lacking in the industry and how we will improve safety.

Current Marine Battery Testing & Certification Failings
One of the biggest risks for batteries is thermal runaway. Thermal runaway occurs if the lithium-ion cells used in marine batteries are subjected to mechanical abuse, suffer from internal manufacturing defects, or operate over or under the correct voltage or temperature, heat is generated within the lithium-ion cells and causes a reaction between the cathode material and electrolyte. This can result in the cells’ temperature increasing until the cell vents toxic and flammable gasses. If ignition occurs, these gasses can create an unpredictable fire, which can be very difficult to extinguish.

The minimum requirement by the Norwegian Maritime Authority for batteries used in commercial vessels in Norway is the Propagation Test Type 1. NME Propagation Test Type 1 is intended to prevent propagation of the thermal event from one module to the next. This test simply means that if a cell in a single module enters thermal runaway and ignites, fire will consume the module but will not ignite the other modules in the pack, and thus the larger system remains safe. Approval is granted when a single module in a battery pack is tested in a lab situation by putting it into thermal runaway and the adjacent modules in the pack do not ignite. However, in the event of an overcharge situation where it is most likely a fault of charging software, or in event of catastrophic mechanical damage, the likelihood that only one cell or module in the pack be affected by itself is extremely unlikely.

It is much more probable that a) the entire system was damaged or b) any number of individual modules were damaged. In a multi module event, it is my assertion that NMA Propagation Test Type 1 may not prevent propagation from module to module.  In my opinion, this renders Propagation Test Type 1 an ineffective method to ensure the safety of the vessel.

Currently there are many battery solutions on the market that use an air cooling system in an attempt to try to maintain safe internal temperatures. The effectiveness is questionable and the reliance on a thin-layer fire-resistant separator between cells only reduces the fire risk from thermal runaway – it does not prevent it. Almost all of these manufacturers claim this “inherent” and “passive” system prevents propagation from one module to the next. This is the minimum requirement by the Norwegian Maritime Authority Propagation Test Type 1 for batteries used in commercial vessels in Norway.

I assert that adherence to this standard alone endangers the vessel, crew, passengers, cargo and environment. It is far more sensible to take all reasonable precautions to eliminate thermal runaway from occurring in the first place.

The Solution – Prevent Thermal Runaway
Liquid cooling is the only safety system currently tested and proven to prevent thermal runaway. Liquid cooling prevents batteries from entering thermal runaway by simply extracting more heat than the cells can produce. Similar to an engine block of an automobile, a low pressure, high volume closed loop of chilled water is circulated through the battery. PBES has developed a proprietary cooling system, CellCool that takes the idea one step further and circulates coolant through the alloy core of the battery, around each individual cell in every battery. The PBES CellCool is able to remove more thermal energy than the cells can produce when in an overcharge or damage scenario. Testing shows that the PBES system is so effective that is works even if the coolant pump is disabled, meaning that in the event of catastrophic damage to the vessel, the system will still protect the batteries. Due to its patented design, CellCool also eliminates hot spots on the cells and maintains optimal cell temperature thus increasing lifespan.

In comparison, forced air cooling only cools the external surfaces of the module and is ineffective at eliminating hot spots in the cells. An air-cooled battery requires around 3500 times more air flow volume than water flow volume to achieve the same heat removal. To try to compensate, the battery room for an air-cooled system requires a robust HVAC system, a misleading extra cost not typically included in the battery price by the battery vendor.

Additional Safety Considerations – Thermal Barriers and Venting
Effective internal thermal barriers are an essential part of lithium battery safety systems. PBES Thermal-Stop is a metal barrier integral to the structure of the battery that works similar to a firewall. It prevents an overheated, overcharged or damaged cell from propagating to the adjacent cell. The event is therefore isolated to one cell and does not affect the others. Ignition will not jump to adjacent cells because of the metallic barrier between them.

In the event of a damaged cell within a module, dangerous gases can be released.  It’s important for every supplier to create safe venting for battery systems. E-Vent is a PBES patented system to vent flammable gasses from a damaged module safely away from the battery area. It reduces risk of a secondary explosion and allows the crew to re-enter the vicinity of the battery system sooner to make repairs and restore power. The image above shows the prototype vent tube of the PBES E-Vent system in testing.  In all of PBES’ testing to date (observed by independent third parties) no measureable amount of gas could be captured. Using the PBES CellCool system, the cells simply do not combust. In fact, when the test modules were disassembled and inspected, the cells that had been overcharged looked virtually identical to untested units, save a small rupture on the top of the cell near the terminals. Despite the fact that the PBES cells were not damaged and no appreciable gas has been detected, we understand the potential risks and every system we install has an integrated E-Vent system.

Conclusions – Will it happen on your watch?
Given the rapid uptake of the use of large format lithium-ion batteries in commercial marine vessels, I believe that energy storage system safety is lacking. Current standards leave significant potential for hazardous situations to arise, I sincerely hope that in this instance there will be no loss of life, and the environmental cost will not be too great. It is the responsibility of industry and regulators to do everything possible to ensure a major incident does not occur. Unfortunately, the majority of the industry has responded to price pressure from owners and operators by reducing costs and subsequently, safety systems to meet the bare minimum of requirements. In the interest of hastening the adoption of energy storage in industry, PBES has always been willing to license its safety systems. This will help those who wish to go beyond the minimum requirements and help move the clean marine industry forward. For now, the industry may have to suffer the consequences of inaction.

About PBES
In 2017, PBES installed 15.3 MWh of lithium storage on 12 DNV GL or Lloyd’s Register vessels approved by the relevant maritime flag authorities. The PBES energy storage system is DNV GL Type Approved, and the company is ISO 9001:2015 certified.

PBES energy storage is the only one proven to stop thermal runaway. It has been engineered with performance and safety as the two guiding principals that direct the design. The resulting liquid cooling system makes the battery last longer, work harder and keeps your vessel safe.