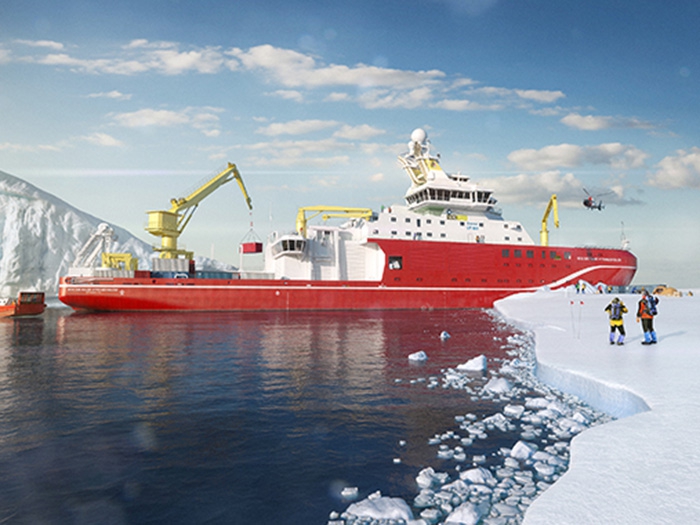 The RRS Sir David Attenborough project is the biggest commercial shipbuilding contract currently underway in Britain and one of the biggest for more than a generation.

SEPTEMBER 29, 2017 — Rolls-Royce has marked a major milestone on the journey towards completion of Britain’s new polar research vessel, the RRS Sir David Attenborough.

The last of the vessel’s Bergen B33:45 engines /gensets have been craned into the ship’s hull at Merseyside shipbuilder Cammell Laird, ready to be connected to Rolls-Royce propulsion system.

The nine cylinder engines are installed in three separate pieces. The first part of the nine cylinder engine to be craned into place was its double resilient foundation. This huge specialized rigid welded skid, which sits on rubber noise dampers, is an integral part of the vessel’s low underwater radiated noise design. The foundation is followed by the engine itself and then the alternators.

Professor Dame Jane Francis, British Antarctic Survey (BAS), Director, said: “All of our scientists, engineers and support teams are watching the build progress of our new ship with excitement. This latest milestone takes us a step closer towards using this state-of-the-art research facility. Our engineers and scientists need the ship’s engines to be quiet during underwater scientific experiments and we are very pleased that the engines are designed for fuel efficiency to help us minimise our impact on the environment.”

John Syvret CBE, CEO, Cammell Laird, said: “This is a major milestone in the journey towards the completion of this state-of-the-art vessel. It shows what Cammell Laird, one of Europe’s most innovative, best equipped and highest skilled marine engineering service providers can do. With our world-class facilities and workforce, we are well on the way to completing the highly complex advanced engineering project which is the RRS Sir David Attenborough.”

Mikael Mäkinen, Rolls-Royce, President – Marine said “The Rolls-Royce designed RRS Sir David Attenborough is the most advanced scientific maritime vessel ever constructed. We had to meet a very demanding list of design requirements from Cammell Laird and its customer, the National Environmental Research Council (NERC) on behalf of the British Antarctic Survey, and work hand in hand with them to make our vision a reality. I’m proud to think that Rolls-Royce equipment, including the B33:45, will play a role in helping future climate scientists understand how changes in the Arctic and Antarctic will impact the wider global climate.”

The vessel’s four Bergen B33:45 engines (two nine-cylinder and two six-cylinder) engines provide both mechanical propulsion and electric power generation in a power range from 3,600 to 5,400kW.

The engines, together with the unique Rolls-Royce hull shape design, will allow the RRS Sir David Attenborough to cut through the ice, pushing it away and under the ice sheet being crossed. This enables the vessel to break ice to a thickness of 1.5 ms at a minimum speed of 3 knots.

The engines run on low sulfur fuel, have good fuel efficiency down to very low loads and are fitted with a Selective Catalytic Reduction (SCR) system and an electronic engine management system with an integrated control unit. This monitors and controls all key engine functions and exhaust after treatment. The vessel complies with both IMO Tier II and Tier III rules.

One of the most stringent design requirements for the vessel was very low levels of underwater radiated noise to allow the undertaking of underwater survey work.

The gensets provide power to the electrical system and 5 MW peak effect battery capacity. Batteries reduce the vessel’s fuel consumption, emissions, noise and vibration as well as increasing redundancy and consequently safety. Using electrical rather than hydraulic winches where possible also reduces the risk of pollution.