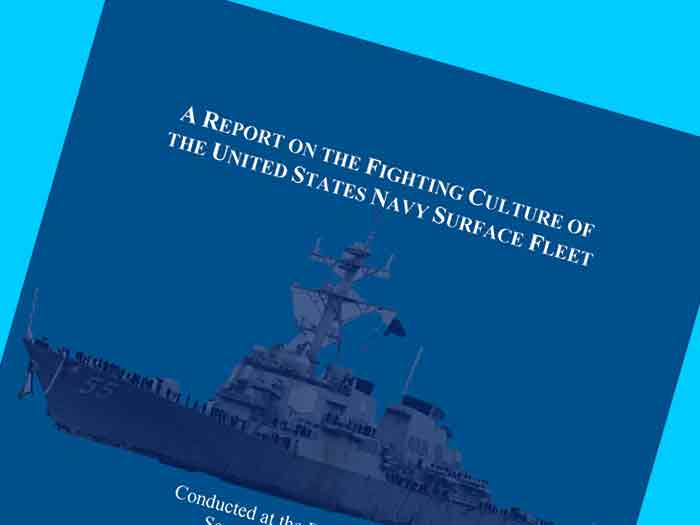 A Report on the Fighting Culture of the United States Navy’s Surface Fleet,

A report commissioned by four members of Congress in the wake of several high-profile Navy losses of lives and warships makes disturbing reading. Entitled “A Report on the Fighting Culture of the United States Navy’s Surface Fleet,” it was commissioned by, Sen. Tom Cotton (R-Ark.) along with Representatives Jim Banks (R-Ind.), Dan Crenshaw (R-Texas), and Mike Gallagher (R-Wis.).

“The findings of this report are very concerning,” said Cotton. “Our sailors are too often deprived of the training and leadership they need to fight and win at sea.”

“This report doesn’t mince words,” said Banks. “At a time when the Navy’s readiness is more critical than ever before, this report depicts a Navy leadership that’s distracted from the number one threat to American national security: The Chinese Communist Party.”

“The findings clearly indicate that our sailors are not receiving the training they need to perform the essential functions of the Navy: to find and sink enemy fleets and ensure freedom of navigations,” said Crenshaw.

“As we’ve seen from a tragic string of accidents in recent years, it is clear that all is not well in our surface Navy,” said Gallagher.

Subjects were identified by a blind referral process, with a preference for officers with surface warfare experience and significant time at sea. 78% of interviewees were active duty, both current and separated/retired, with approximately 20% serving as reservists. The sample selection was overwhelmingly officers between the grades of Lieutenant (O-3) and Captain (O-6). Of the 77 interviewed, 67 were male and 10 were female.

Specific issues raised by the interviews:

Insufficient leadership focus on warfighting. Perhaps the most concerning comment and consistent observation amongst interviewees was that the service does not promote or advance surface ship warfighting in a meaningful way. Finding and sinking enemy fleets should be the principal purpose of a Navy. But many sailors found their leadership distracted, captive to bureaucratic excess, and rewarded for the successful execution of administrative functions rather than their skills as a warfighter. There was considerable apprehension that the surface warfare community in particular lost its fighting edge in the years following the end of the Cold War. With China building and operating a competitive fleet, the lack of proper attention on warfighting was of deep concern to many interviewees.

A dominant and paralyzing zero-defect mentality. A prevalent theme emerged over the course of the interview process: near universal disdain for the so-called “one mistake Navy,” the practice of treating certain errors with career termination and offering no opportunity for recovery. A former senior leader framed this problem using an evocative historical analogy, suggesting that none of the four key Admirals who led victorious fleets in World War II would have made it to the rank of Captain in today’s Navy. The general unwillingness to rehabilitate one-off mistakes, the disinclination to weigh errors against the totality of a naval career, and the practice of discipline-by-paperwork were broadly understood to be a drain on the Navy’s retention efforts.

Poorly resourced and executed surface ship maintenance programs. Nearly every interviewee had a story of a cancelled, delayed, or drastically reduced major maintenance availability. Often this was identified as a problem driven by senior civilian leadership and combatant commanders who consistently accepted the “maintenance risk” to squeeze an extra month or two out of a deployment. But this was also seen as a failure in manning and training the surface community to develop and assess maintenance work packages. Finally, there was an overwhelming perception that the surface Navy is the “billpayer” as aviation and submarine nuclear maintenance packages were seen as too risky to underfund. The cumulative effect of this underfunding and poor execution has left the surface warships less modernized and less ready for combat operations.

Expanding culture of micromanagement. Concerns of micromanagement within the surface warfare community are alarming. Sailors’ concerns were two-fold. The first is that technology has empowered admirals and commodores to exercise greater, arguably unhealthy, levels of control over ship captains. The second was that this control drives a level of toxicity and lack of accountability and initiative in the Navy’s warfighting command hierarchy. Given the increasing likelihood that naval commands may be isolated or cut off from communications in a high-end fight, creating undue dependence on higher headquarters for day-to-day direction could negatively impact future naval combat operations.

Corrosive over-responsiveness to media culture. Sailors believe that Navy leaders are excessively reactive to an unyielding U.S. news cycle, and are unable to distinguish between stories that demand a response and stories that do not. A pervasive sentiment is that Navy leaders have subverted the responsibilities of the chain of command to the pages of Military.com or the Military Times, and make punitive decisions based on negative news reports rather than the service’s own standards of discipline.

The full report is must reading. To give you some of its flavor, here is a sampling of some quotes from the interviews:

“Sometimes I think we care more about whether we have enough diversity officers than if we’ll survive a fight with the Chinese navy.”

“No one would ever expect an aviator to land a plane on a flight deck or a submarine officer to dive the boat after a few weeks reading 23 Compact Discs (CDs), but the Navy did exactly that …”