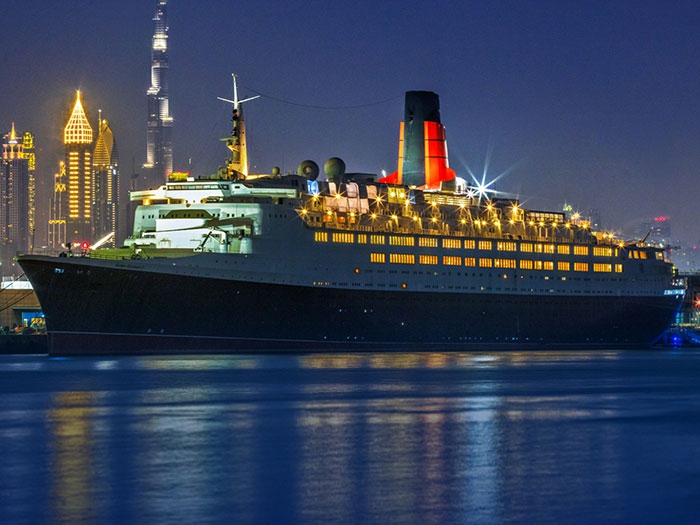 APRIL 17, 2018 — The legendary former Cunard flag ship Queen Elizabeth 2 (QE2) is set to finally open its doors to the public as a hotel in Dubai tomorrow, April 18, almost 50 years after her completion by the John Brown shipyard in Scotland and more than nine years after her retirement from active Cunard service in November 2008.

Among the first visitors to the new hotel will be guests traveling on Cunard’s current flagship, Queen Mary 2, which arrives in Dubai in time to allow guests the opportunity to join VIPs and local media for the QE2 opening ceremonies

Initial plans by Dubai World to convert the vessel to a hotel were disrupted by the 2008 financial crisis, but now PCFC Hotels – part of the Dubai government’s Ports, Customs and Free Zones Corporation – says it has “reinvented the legendary vessel as the latest must-see tourism destination, in a city renowned for its world-class attractions.”

The ship is now docked permanently at Mina Rashid, where her dining, accommodations and entertainment attractions will be unveiled.

Her opening marks the first phase – a “soft opening” – of several stages in which segments of the liner will be opened and released.

Hamza Mustafa, CEO of PCFC Hotels commented: “To finally open the QE2 is a dream come true for my team and I. It is one of Dubai’s most highly anticipated projects and we know that a lot of people are going to be very excited to see her for the first time, or to step back on board the vessel that created so many wonderful memories during her 40 years at sea.

“We are especially thankful to our Chairman, Sultan Ahmed Bin Sulayem whose vision and determination to give her a second life has come to fruition. His passion for the Queen Elizabeth 2 and all that she represents means that she can continue to deliver the grandeur that she stood for, within a new special location at the heart Mina Rashid, in Dubai.

“We have dedicated more than 2.7 million man-hours into transforming this legendary ocean liner into the multi-faceted tourist destination that she is today and I am very proud to reintroduce her to the world as she embarks on the next stage of her celebrated journey. It has been an honor to work on this wonderful project and to help ensure that our lovely Lady lives up to her new slogan: still making history.”

According to PCFC Hotels, the 13-deck hotel “has been thoughtfully restored to her former glory – maintaining her most loved interior design features – including her period furniture, renowned paintings and famous memorabilia. The original porthole windows still add a maritime feel to the attractive modernized guest rooms and a number of her original restaurants have retained the same names and décor as in her former years.”

During the soft launch period, guests can experience some of the ship’s original restaurants including the Chart Room, the Golden Lion pub, the Pavilion, the Grand Lounge and the Yacht Club. The hotel’s signature restaurant is the Queen’s Grill.

The grand launch of the QE2 will take place in October 2018.