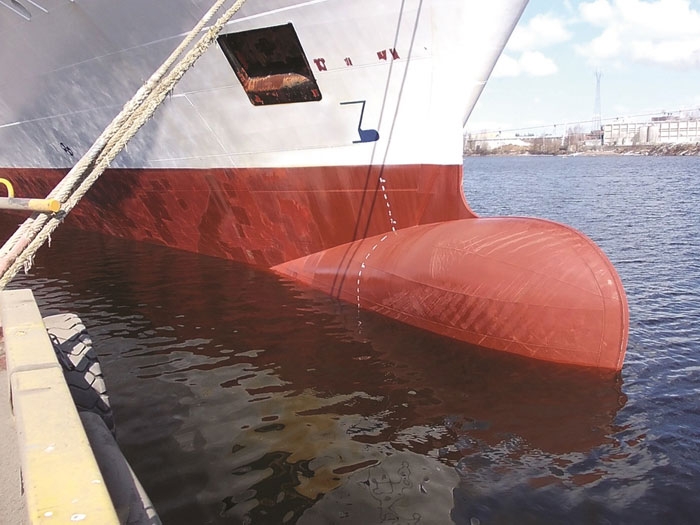 The coating, developed for very high abrasion and impact applications on decks and hulls, combines a top-of-range phenolic epoxy with carefully-selected pigments to provide exceptional performance in icy waters.

Sigmashield 1200 coating has already seen more than a decade of service on ships operating in areas of heavy ice formation, including the Baltic Sea and St. Lawrence Seaway/Great Lakes system. PPG has received increasing interest from owners specifying ice-capable coatings for newbuildings and existing tonnage as the potential of Arctic transits and Arctic offshore activity grows.

“The combination of a top-quality epoxy matrix and extremely hard pigment is unique in this type of application and provides superior protection,” said PPG Product Manager Christophe Cheikh. “We have designed this product to be easy to use by single-feed airless spray whether for dry docking or newbuilding projects. Its quick-curing hardener means Sigmashield 1200 can be applied at low temperatures without compromising performance and allowing for a fast return to service.”

The size of the ice-going fleet is increasing, as is the size of the ships themselves. Currently around 10 percent of the ice class order book is above 60,000 deadweight tonnage, with the majority of investments made by owners in Germany, China, South Korea and Norway. German owners have the second-largest share of the order book and the largest proportion of the ice fleet, while China has the second-largest ice-capable fleet on order.

Mr. Cheikh says the coating has been particularly successful in newbuilding projects where owners require a higher-grade product than the standard anti-corrosive coatings.

“The owners look at the performance of the vessel over its operating life and the varying scenarios it is likely to encounter,” he says. “In the future, that is more likely than ever to include ice-infested waters where it is important to match the coating solution to the operating conditions. The future potential of more summer transits of the Northern Sea Route certainly plays a part in those decisions.”

Sigmashield 1200 coating already has proven itself in harsh ice conditions in different parts of the world known for heavy ice, such as the Baltic Sea and the U.S./Canadian Great Lakes and Seaway trades.

Its excellent low friction coefficient in ice has been confirmed by Aker Arctic Technology, a major independent testing institution that specializes in low-temperature testing at the limits of ice-going conditions. Vessels serving new energy projects in the Russian Arctic will also feature Sigmashield coatings.

Bore’s fleet is composed of ro-ro and general cargo vessels operating under both Finnish and Dutch flags. It includes the ro-ro/container vessel Seagard, which operates year round in the Gulf of Finland, Baltic Sea and North Sea, including during the winter months when the vessel regularly encounters heavy ice conditions.

In addition to a design including extra features to overcome harsh conditions, Seagard features Sigmashield 1200 coating as an abrasion-resistant ice coating to protect the hull against ice impact and gouging occurring on the ice belt and flat bottom. The use of such a coating is vital to minimize damage, maintain vessel safety and reduce subsequent repair costs on the hull.

Following close inspection in dry dock after two seasons in ice, Seagard’s underwater hull was judged to be in perfect condition, an excellent result for a vessel operating in these conditions.