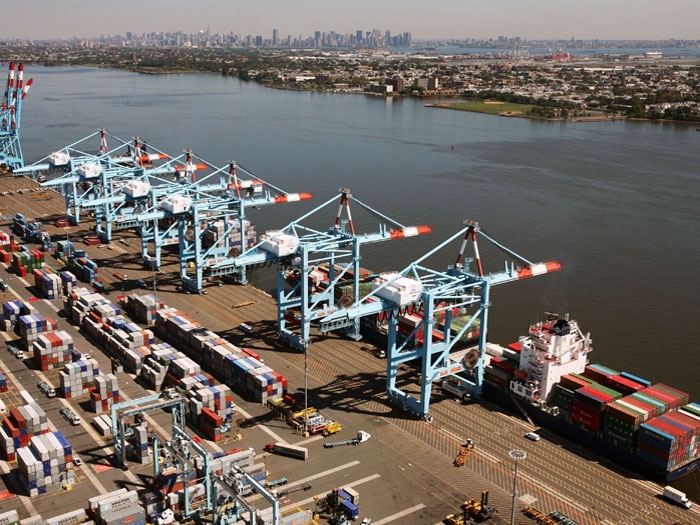 DECEMBER 8, 2014—Container volume at the Port of New York and New Jersey is on a record breaking pace, and this past October the port set a record high for monthly cargo volume, with 306,805 containers. This eclipses the previous high of 306,051 shipping containers handled in August 2013.

The Port of New York and New Jersey reports that the increase was driven by a hike in import loaded containers, up 1% over the previous best month on record.

Cargo shipped on the port’s ExpressRail system also continued to grow, with 42,950 containers transported on rail, up 14.2% over October 2013. More than 14% of the total port traffic is now transported by rail.

“While the improved economic conditions across the country play a large part in our success story, we’re equally pleased that the entire port community is now working together to move more cargo more quickly and efficiently,” said Port Authority Port Commerce Director Richard Larrabee. “We will continue to work with all of our port stakeholders to ensure our long-term success in attracting and retaining international shippers to our port facilities.”

The cargo growth follows the establishment of the Port Performance Task Force, formed one year ago this week to explore ways to improve efficiency and service reliability at the port. In June, the task force released a report consisting of 23 recommendations to enhance the flow of goods from the port to the marketplace and to improve the environment around port facilities.

Following the issuance of the report, the Council on Port Performance—consisting of various port stakeholders—was formed to explore ways to implement the recommendations. A methodology to improve the availability of chassis on the port was recently announced, while other port performance initiatives are being addressed by newly formed implementation teams.

The Council also released a plan last month to improve cargo flow this winter in the event that severe weather impacts port terminal activity. Last winter, the harsh weather hindered cargo movement and resulted in delays in the flow of cargo. The winter plan details improvements to snow-removal operations on port terminals and roadways and provides predictability for charges associated with containers and chassis in the event that terminals are closed for a day due to adverse weather.

On the labor front, since February, 509 new dock workers were certified and added to the labor registry. Of that number, 472 are working and 238 of those workers are veterans. Though their training on heavy equipment and vessel gangs continues, they became immediately available as car drivers and baggage handlers. In addition, 49 new checkers also have been certified. Hiring and training to meet current demand and demand for implementation of the Relief-Gang system will continue in 2015.

Construction on the Bayonne Bridge “Raise the Roadway” project is more than 25% complete, and the Port Authority expects to remove the navigational clearance restriction in the summer of 2016. This will allow larger, cleaner and more environmentally friendly post-Panamax ships to dock at Port of New York and New Jersey terminals.