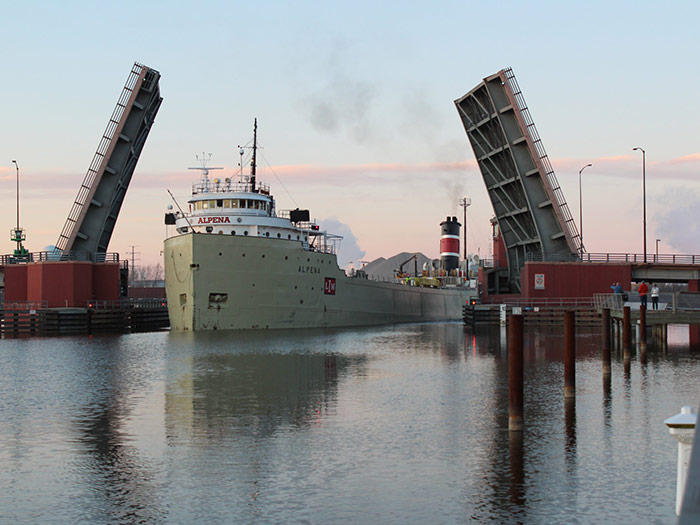 Recent arrivals at Port of Green Bay include the 1942-built SS Alpena, the oldest operational Great Lakes bulker, with a cargo of cement. Photograph by Chuck Zentmeyer

With nearly 207,000 tons of cargo moved into and out of the Port of Green Bay, Wis., in November, total tonnage has now topped the port’s goal of 2 million tons (2,081,962 tons) for the shipping season. Year-to-date tonnage is running 9% ahead of the total from the end of November in 2018.

“Two million tons is the benchmark for a successful shipping season for the Port of Green Bay,” said Dean Haen, Port of Green Bay Director. “Hitting that mark at the end of November is great news with several weeks of shipping remaining before the season closes. We’re still optimistic that we’ll reach 2.3 million tons for this season.”

More than 680,000 tons of limestone was imported in November, with domestic imports of limestone outpacing last year by 23%. Foreign salt imports were also strong in November at 290,000 tons; 60% higher than year-to-date foreign salt imports from last year. Foreign exports of petroleum products have also been strong in 2019, up 125% from the same time period in 2018.

A total of 15 vessels moved into and out of the Port of Green Bay in November.

In the season thus far, 161 ships have visited the port; two less than a year ago at this time of year.