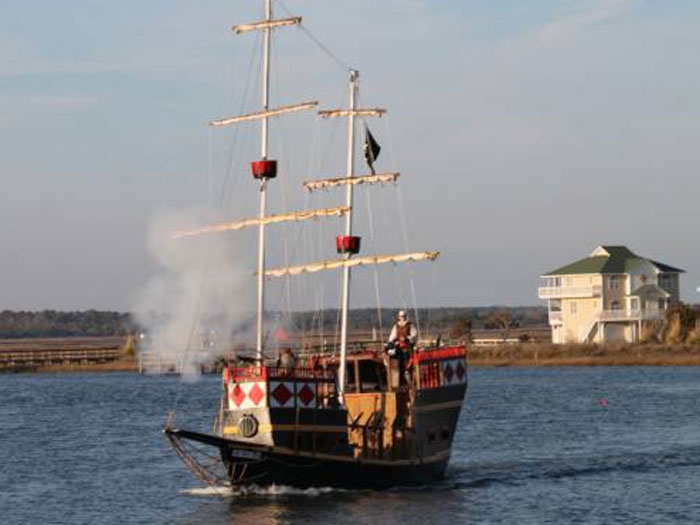 Captain David Wayne Luther operates the Belle of Topsail, a 49 passenger replica of an 1880’s riverboat that cruises from Surf City, N.C., and the Raven, a replica pirate boat that “attacks” it. However, in 2012, Captain Luther was also apparently putting the Raven to uses that drew down the wrath of the U.S. EPA.

“The dredging of federal waterways is strictly regulated to protect water quality and wildlife,” said Maureen O’Mara, Special Agent in Charge of EPA’s criminal enforcement program in North Carolina. “The defendant repeatedly dredged material in an environmentally sensitive area that has been designated an essential fish habitat. EPA will hold violators accountable as part of its mission to protect human health and the environment.”

The maximum penalty that Captain Luther faces at sentencing for both counts is a total of two years imprisonment, and a maximum total fine of $200,000. Pursuant to his plea agreement, says the EPA, Captain Luther has also agreed to purchase .21 acres of coastal wetland restoration in order to compensate for impacts to wetlands and other jurisdictional waters impacted from his criminal conduct prior to sentencing hearing. “If he fails to make the purchase,” says the EPA, “Luther has agreed not to contest a $50,000 additional fine.”

The criminal investigation was conducted by the EPA’s Criminal Investigation Division, the North Carolina State Bureau of Investigation, the U.S. Army Corps of Engineers, and North Carolina Marine Patrol. Assistant United States Attorney Banumathi Rangarajan is handling the prosecution of the case.