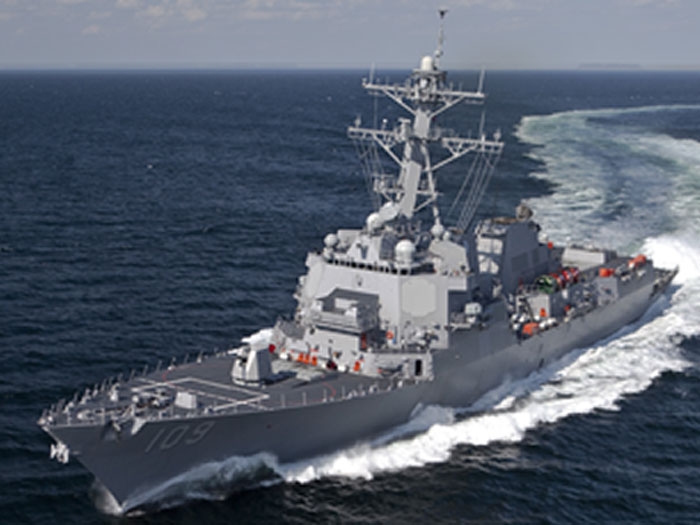 That other shoe has now dropped.

Maine's U.S. Senators. Susan Collins, a senior member of the Defense Appropriations Committee, and Angus King, a member of the Senate Armed Services Committee, said today that the final omnibus spending bill includes $1 billion toward the construction of an additional DDG 51 destroyer that would "likely" be built at Bath Iron Works and would be in addition to those already included in the current multi-year procurement contract.

The following is the statement issued by the two senators — interestingly it contains no acknowledgement whatsoever that the funding was any kind of pre-arranged "done deal," widely expected by defense industry insiders.

U.S. Senators Susan Collins, a senior member of the Defense Appropriations Committee, and Angus King, a member of the Senate Armed Services Committee, announced today that the final omnibus bill includes $1 billion toward the construction of an additional DDG-51 destroyer. This destroyer would likely be built at Bath Iron Works. This destroyer would be in addition to those already included in the current multi-year procurement contract. The omnibus bill will be considered by Congress later this week.

As a senior member of the Defense Appropriations Committee, Senator Collins requested the funding toward the additional DDG-51 to help meet combatant commander requirements for destroyers across the globe. Senator Collins successfully advocated for the inclusion of the $1 billion in funding in the Senate Defense Appropriations Bill. The House Defense Appropriations Bill, however, allocated no funding for this additional destroyer. Following weeks of negotiations between the House and Senate regarding the bill, the omnibus bill appropriates the full $1 billion in funding toward this additional ship, affirming the strategic importance of our Navy and shipbuilding programs.

"Our destroyers are the workhorses of the Navy, and I am proud of the highly skilled, hardworking men and women at Bath Iron Works who continue to deliver the highest quality ships for our nation's sailors," said Senator Collins. "The power of presence cannot be taken for granted or ignored, which is why the investments for this new destroyer funded by this bill are so necessary. In a time of serious budget constraints for our Defense Department, this important investment underscores the value and importance of our naval assets to the security and stability of our country. The equation is simple: fewer ships means less presence, less security at home, and less security around the world. I am so pleased that after many long hours of negotiations, this $1 billion in funding was included in the final omnibus bill."

"Senator Collins is a relentless advocate for the hardworking men and women at Bath Iron Works, and I am thankful that she was able to secure additional funding for shipbuilding through her position on the Appropriations Committee," said Senator King. "The funding for this additional ship is a major achievement for Maine and she deserves all the credit. There is no one I'd rather be working with on behalf of BIW, the State of Maine, and the men and women of our armed forces than Susan."

Senators Collins and King work together in support of Bath Iron Works from their respective positions on the Appropriations and Armed Services Committees. As a member of Armed Services, Senator King works to ensure that critical shipbuilding funding is authorized through the National Defense Authorization Act, a yearly bill that authorizes funding and directs policy for the Department of Defense. And as a senior member of Appropriations, Senator Collins works to make sure the authorized funds are then actually appropriated to shipbuilding priorities. Through this joint effort, the Senators are able to prioritize shipbuilding throughout the funding process.

As of January 2015, the Navy had 279 ships, well short of the goal set by the Navy's 30-year shipbuilding plan which calls for the United States to have 304 ships by 2020. This investment will help to grow the Navy's shipbuilding capabilities at a time when the Navy fleet is in high demand to protect national security interests worldwide.

DECEMBER 16, 2015—When Huntington Ingalls Industries (NYSE:HII) was awarded a $200 million advance procurement contract for LPD 28 this month (see earlier story), the move signaled that an additional DDG 51 destroyer contract would be on its way to General Dynamics Bath Iron Works under a “hull swap” agreed in a 2002 MOU between the Navy and its two largest shipbuilders.